Interview: 'Mitch Albom's Have a Little Faith' is Food for the Soul

Challenging. Engaging. Entertaining. Thought provoking. These are just a few words the described my impression of Mitch Albom's new Hallmark Hall of Fame movie, "Have a Little Faith," which premiers Sunday, November 27 on ABC. 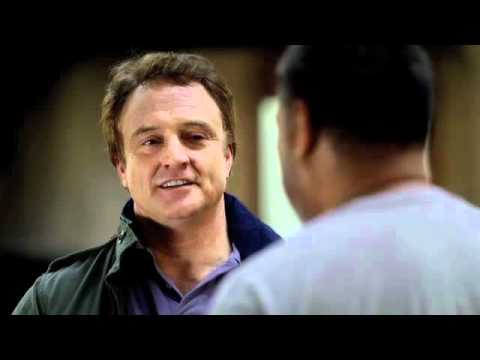 The story is an eight-year journey that weaves together two distinct events that overlapped in the life of author and journalist Mitch Albom ("The Five People You Meet in Heaven," "For One More Day"), portrayed in the movie by Bradley Whitford ("The West Wing," "Studio 60 on the Sunset Strip").

While back visiting his native New Jersey, Albom encounters the rabbi of the synagogue he had attended as a child, Rabbi Albert  Lewis (Academy Award winner Martin Landau, "Ed Wood," "Entourage"). "The Reb," as Albom calls him, asks Albom to write his eulogy. Over the course of several years, the author regularly visits his former spiritual leader to learn more about this interesting man.

He also meets Henry Covington (Emmy and Tony Award winner and Oscar nominee Laurence Fishburne, "What's Love Got to Do with It," "Two Trains Running"), a Detroit preacher who overcame - along with his wife, Annette (Tony Award winner Anika Noni Rose, "Dreamgirls," "Caroline, Or Change") - a life mired in drugs and crime.

This reverend-in-recovery was the pastor of a small congregation in a broken-down building called I Am My Brother's Keeper Church. They not only provided food for the homeless but also offered the facility as a place -- on the church floor -- where they could sleep.

As a sports columnist for the Detroit News and city-celebrity, Albom has started several charities, most of which are focused on helping the homeless in the Motor City. It was through his non-profit, S.A.Y. Detroit (Super All Year Detroit), a group of non-profit charities dedicated to helping improve the lives of Detroit's most needy, that he became friends with Henry.

"Part of my job," he explained, "was to go to places and see what they needed. I found I Am My Brother's Keeper Church and went in. When I saw Henry I thought he was the janitor!"

S.A.Y. Detroit began through a story Albom read, in February of 2006, about the homeless in Detroit would be given a special Super Bowl "party" to keep them off the streets for the big weekend, but would be put back on the streets come Monday morning. The story really disturbed him so much that he wrote a piece calling upon the city to do as much for the homeless the rest of the winter as they were willing to do for a weekend. He even spent a night in a shelter to call attention to the issue.

In "Have a Little Faith," these two events in Albom's life - talking with "The Reb" and working with Henry - are woven into a heart-warming story of faith.

Rabbi Albert Lewis passed away on February 10, 2008 and Albom did, in fact, deliver his eulogy.

Lewis, described by Albom as "the singing rabbi," was a leading American Conservative rabbi, scholar, and author in his own right. He also served as President of the Rabbinical Assembly (RA), the international organization of Conservative rabbis; and Vice-President of The World Council of Synagogues.

"The Reb" even served as an international correspondent for The Catholic Star Herald during his sabbatical year in Israel just after the "Six Day War" of 1967.

According to a Wikipedia account, Lewis promised his readers of "honest and objective reporting, and not propaganda," stating that he would "try to present the feel or mood of Israel as accurately as possible."

While in Egypt he used press credentials from the Catholic paper, and traveled as Dr. Albert Lewis. He was then able to journey into areas where it would quite dangerous for an American Jew or rabbi, so soon after the end of the Six-Day War.

The rabbi's chats drew Albom back into the faith he'd left years before. As a part of the eulogy, the author wrote, "I didn't want to eulogize you. I was afraid. I felt a congregant could never eulogize his leader.

I asked Mitch Albom at what point he thought, "I've got to write about this."

"Not until I got involved with Henry," he replied. "I was already visiting Rabbi Lewis when I when I was writing other books after 'Tuesdays with Morrie." In fact, I gave a copy of the galleys for 'The Five People You Meet in Haven' to the Rabbi."

What intrigued Albom, after meeting Henry Covington, was the idea that he was involved in two different walks and two different faiths.

"I don't believe anyone has ever written about two faiths; about how they can look different but still be the same."

The author, who also wrote the screenplay, was delighted with the cast that they were able to assemble for the production.

"We were very lucky that the people at the top of the list for the key roles (Fishburne, Landau and Whitford) wanted to do this movie. Bradley Whitford was perfectly cast to go between both of those places."

The promotional material for "Have a Little Faith," describe the movie as "a story about life's purpose - losing belief and finding it again - and about the divine spark inside all of us."

As the author said to me, "No matter what age or where you are, you can always come back."

For Mitch Albom, however, there is also another takeaway, "We are more alike than we are different," he said. "At the core we are very similar, committed to helping other people."

"Have a Little Faith," Albom's first non-fiction book since "Tuesdays with Morrie," was a No. 1 New York Times bestseller, remaining on the list for more than seven months, and was published in March in paperback. Both editions are by Hyperion.

Brent Shields ("Beyond the Blackboard," "The Lost Valentine"), Mitch Albom and Jon Avnet are executive producers. John Avnet also is the director. "Mitch Albom's Have a Little Faith" is from Hallmark Hall of Fame Productions, Inc.

Don't view this movie expecting a theological exposition. Mitch Albom is a wonderful storyteller who shows us the similarities that exist in people of faith, no matter their differences in theology. Despite these differences, both men practice the care of souls in the service of God.