Just as the Chief Priests and Pharisees gathered with Pilate to plan on keeping the tomb sealed and guarded with Christ inside, many today want to place a stone in the entrance of the Church, to keep him inside again. On Holy Saturday we remember that no matter how hard the world tries to keep Christ hidden, He bursts forth in resurrection glory through His Church. 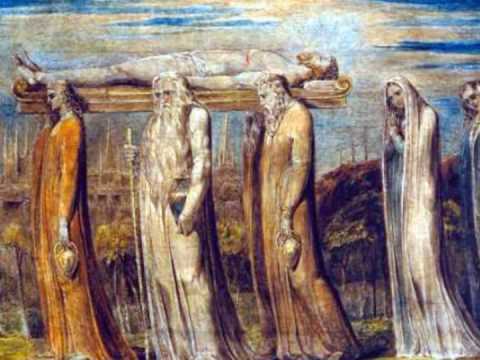 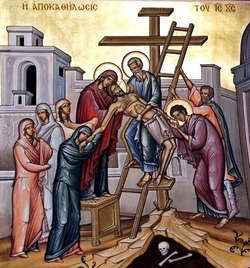 God has died in the flesh and hell trembles with fear

WASHINGTON, DC (Catholic Online) - "Make sure he's dead!" Father Saunders made that statement at our Good Friday liturgy in describing the instructions given to the centurion who pierced the side of the Lord.

I thought about that statement a lot after the service. It was not only the reason for the pierce of a lance but the tomb sealed and guarded.

The lance made sure that he was dead physically, as blood and water flowed from our savior's side; but he needed to remain dead in influence as well. The tomb was being closely watched that no one would steal the body and spread the rumor of a resurrection.

On Holy Saturday the world-without-Jesus thought it could now go back to life as normal. After three years of combating the ministry and miracles of this carpenter from Galilee, they could now return to a life they have defined for themselves. The Romans had taken care of a threat to Caesar's influence; the Sanhedrin has rid themselves of a threat to theirs.

Holy Saturday is the part of the Triduum that is observed mostly by an absence of attention. To those of us who believe, it is reminds us of the hopelessness that would permanently have inhabited the world, had not the savior risen from the dead.

On the first Holy Saturday, the Jews maintained their custom. In Scripture, Luke simply states, "On the Sabbath they rested according to the commandment." (Luke 23:56b)

For the Romans, this was simply another day of activity. The streets of Jerusalem were quiet, as would be normally found, since it was the Sabbath. At the tomb, soldiers maintained their vigil near the stone with a Roman seal that blocked the entrance to the place where Jesus lay.

Their instructions were clear, anyone who attempted to take the body would be stopped at all costs.

It would seem that this is the world as many today would like it to be. Everyone simply going about their business in their own way, following whatever custom and tradition they personally embrace while the body of Christ remains buried.

They want Him to remain in the tomb where He can't do anything to mess up their way of life. They want Him silent and hidden. It makes their life easier; they can stay in control and not worry about such burdensome things as sin, righteousness and judgment.

The Congregation for the Divine Liturgy and the Discipline of the Sacraments, in their Directory on Popular Piety and the Liturgy, states

"146. On Holy Saturday, the Church pauses at the Lord's tomb, meditating his Passion and Death, his descent into Hell, and, with prayer and fasting, awaits his resurrection

"Popular piety should not be impervious to the peculiar character of Holy Saturday. The festive customs and practices connected with this day, on which the celebration of the Lord's resurrection was once anticipated, should be reserved for the vigil and for Easter Sunday.

"147. According to tradition, the entire body of the Church is represented in Mary: she is the "credentium collectio universa"(152). Thus, the Blessed Virgin Mary, as she waits near the Lord's tomb, as she is represented in Christian tradition, is an icon of the Virgin Church keeping vigil at the tomb of her Spouse while awaiting the celebration of his resurrection.

"The pious exercise of the Ora di Maria is inspired by this intuition of the relationship between the Virgin Mary and the Church: while the body of her Son lays in the tomb and his soul has descended to the dead to announce liberation from the shadow of darkness to his ancestors, the Blessed Virgin Mary, foreshadowing and representing the Church, awaits, in faith, the victorious triumph of her Son over death."

Thus for the faithful, Holy Saturday is a day of waiting and preparing as Mary did near the tomb of her son. We remember that he is already at work, proclaiming the finished work during His descent to the dead. While Mary did not really know what would happen next, there was a sense of anticipation that there is more to come; a sense we need to keep with us today.

We must remember this this Easter proclamation is not just for us in the privacy, within the walls of the church. This is a universal declaration. He died and rose again for the life of the world.

Before His ascension, our Lord commissioned His Church to proclaim this gospel to all nations. He sent the Holy Spirit to anoint and strengthen us for the task.

The world still wants us to be silent. Many may want to have him remain in the tomb. In our current day, they are working hard to roll a stone in front of the entrance to the Church and put a seal upon it, that Christ may be kept inside.

As Christians we need to remember that the same power that raised Jesus from the dead is at work within us today! The stone cannot stay in place as his resurrection glory is released through His Body the Church on Easter.

This Easter let us burst forth with the joy and hope of the resurrection. Through our words and deeds, may we remind the world once more that He is alive! Because He lives, all have the hope and possibility of eternal life through the One who gave His life as a ransom for many.

The Church is Established (8th Grade)