Reflection on the Catholic Catechism: Understanding the Bible

Free World Class Education
FREE Catholic Classes
The Catechism mentions three criteria for interpreting the Bible. They are as follows: the unity of the Scriptures, the living Tradition of the Church, and the analogy of faith.

How we interpret the Bible is of immense importance! It directly affects what we believe about Christ, the Church, and our faith, but it is also related to many of the grave problems in our society and the world. Yet, despite the gravity of this situation, we have good reason to be filled with hope. 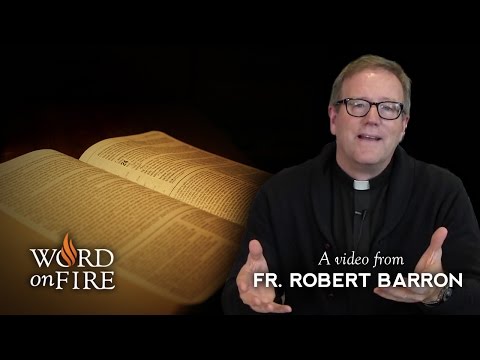 KNOXVILLE, TN (Catholic Online) - The Catholic Church exhorts all the Christian faithful to read the Bible. But it is important how we interpret it. How we interpret the Bible directly affects what we believe about Christ, about the Church, and about our faith in general. In this article we will reflect on some of the ways the Church interprets the Bible, and on the crisis in modern biblical scholarship and in the world.

When we read the inspired Word of God in the Sacred Scriptures, the Catechism of the Catholic Church (CCC) tells us that we "must be attentive to what the human authors truly wanted to affirm and to what God wanted to reveal to us by their words" (#109).

This means that we must take into account the conditions of the time and culture of the inspired authors, and "the literary genres in use at that time, and the modes of feeling, speaking, and narrating then current. . . . 'For the fact is that truth is differently presented and expressed in the various types of historical writing, in prophetical and poetical texts, and in other forms of literary expression"' (CCC #110).

The Catechism mentions three criteria for interpreting the Bible. They are as follows: the unity of the Scriptures, the living Tradition of the Church, and the analogy of faith.

First, even though the Bible is made up of 73 different books, each book, each chapter, each sentence and word need to be seen as a "unity of the whole Scripture" (CCC #112). This is not some arbitrary rule made up by the Church. It is a natural consequence of God's plan of salvation, which is to say, God's plan of salvation is the unifying context or framework for each book, chapter, sentence, and word.

Second, the Bible needs to be read within "the living Tradition of the whole Church." The reason for this is beautifully stated in the Catechism: "According to a saying of the Fathers, Sacred Scripture is written principally in the Church's heart rather than in documents and records, for the Church carries in her Tradition the living memorial of God's Word, and it is the Holy Spirit who gives her the spiritual interpretation of the Scripture" (CCC #113).

The third criteria for interpreting the Bible is to be attentive to the analogy of faith. This means that we are to interpret what we read in terms of "the coherence of truths of faith among themselves and within the whole plan of Revelation" (CCC #114).

We also need to be aware of the Bible's literal and spiritual senses. The literal sense simply refers to the meaning of the words in the text based on sound rules of interpretation. The spiritual sense includes the moral teaching found in the Bible, and something called typology. Typology is fascinating, and learning about it opened up the Bible for me in a way I never imagined.

In one respect, typology is a way to interpret certain people, things and events in the Old Testament as signs or types that point to greater realities in the New Testament. It is generally associated with God's plan of salvation and Jesus. According to the Catechism, typology "discerns in God's works of the Old Covenant prefigurations of what he accomplished in the fullness of time in the person of his incarnate Son" (#128).

Jesus himself showed us how to read the Scriptures typologically when he explained how the Old Testament Scriptures referred to him in the Gospel story of Emmaus. In this story Jesus appeared to two of his disciples while they were walking on the road to Emmaus and lamenting his crucifixion and the disappearance of his body from the tomb.

Jesus said to them: "Oh, how foolish you are! How slow of heart to believe all that the prophets spoke! Was it not necessary that the Messiah should suffer these things and enter into his glory?' Then beginning with Moses and all the prophets, he interpreted to them what referred to him in all the scriptures" (Lk 24:25-32).

There are many examples of typology in the Bible. For example, Adam is a type or sign of Christ (1 Cor 15:45). In the Gospel of John, Jesus is referred to as the new Moses (1:17). The flood during the time of Noah prefigures the sacrament of Baptism (1Pt 3:20-21). The manna that the Jews ate while wandering in the desert prefigures the Eucharist (Jn 6:31-35). And the Church on earth, the Bride of Christ, is also a sign of the heavenly Jerusalem (Rev 21-22).

The modern approach to biblical interpretation is called the historical-critical method. It is an attempt to bring scientific principles to biblical scholarship. Its goal is to accurately identify and understand the past by discovering "the precise sense the words were intended to convey at their time and place of origin" (Jesus of Nazareth, Pope Benedict XVI, p xix).

This is a wonderful goal, and the Church wholeheartedly supports it, but with certain qualifications. The most serious being that such scholarship needs to be conducted objectively. Unfortunately, many biblical scholars believe that they must reject all supernatural causes in order to be scientific.

But this is false, and it results in gross bias. Furthermore, it has caused a full blown crisis in biblical scholarship. Benedict XVI discusses this crisis in his 2010 Apostolic Exhortation, The Word of the Lord.

He says that the Scriptures were written by a faith-filled community under the inspiration of the Holy Spirit. Consequently, the Scriptures must be interpreted with this view in mind. Modern scholarship, he says, not only attempts to divorce the text from its proper context, but it approaches the Scriptures with certain preconceived notions that are inimical to the faith.

For instance, the notion that the "Divine does not intervene in human history" completely negates the message and meaning of the Scriptures, and it largely explains many of the false and confusing statements we hear today. Thus, we often hear that the Eucharist is not the true Body and Blood of Jesus, or Jesus did not physically rise from the dead, but only in the hearts and minds of his disciples. Clearly, these statements are fundamentally flawed.

The biblical scholar and popular writer Scott Hahn discuses this crisis in his book, Communion and Covenant. He notes that the crisis in biblical scholarship today is rooted in bad philosophy which has led to subjectivism and relativism. As a result, he says much modern scholarship has drifted toward "hypothetical reconstructions."

On another occasion Dr. Hahn used a vivid image that describes many of these "hypothetical reconstructions." It goes something like this: The historical-critical method has finally enabled scholars to see all the way down to the bottom of the deepest and darkest well, but all they have found is their own reflection.

Benedict XVI and Scott Hahn are describing what happens when scholars inject bias, subjectivism and relativism into their work: Their work and their thinking lack coherence, beauty, depth, and meaning. Instead of producing clarity, as you would expect from rigorous reasoning or legitimate science, they are producing chaos, and they are undermining truth.

As if this is not serious enough, I believe the crisis in biblical scholarship is related to a larger crisis: a radical breakdown--throughout academia, our society and the world--of faith, reason, beauty, moral goodness, justice, and hope. Benedict XVI said the separation of faith and reason and diminution of each is the root cause of the "grave problems in the world today."

It is all connected! Therefore, how we interpret the Bible is of immense importance. It directly affects what we believe about Christ, the Church, and our faith, but it is also related to many of the grave problems in our society and the world.

Yet, despite the gravity of this situation, I am filled with hope because when more people begin to interpret the Bible the way the Catholic Church does, and they see the depth and richness that the Church sees in the Bible, I believe it will change hearts throughout our society and around the world.