Free World Class Education
FREE Catholic Classes
One of the biggest problems Jesus needed to confront among his first followers - and his disciples in every age - is ambition.

St. Therese Lisieux helps us to understand and put into practice Jesus' words that if we want to be great in his kingdom we must become like a child. In response to the disciples' question, "Who is the greatest in the Kingdom of heaven?," Jesus called a child over and said, "Whoever becomes humble like this child is the greatest in the Kingdom of heaven."  For us to live the Year of Faith well, we must be more childlike in our practice of the faith. 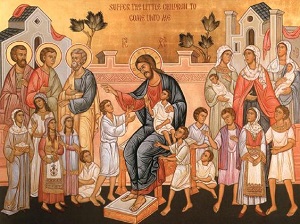 Jesus and the children

P>FALL RIVER, MA (Catholic Online). One of the biggest problems Jesus needed to confront among his first followers - and his disciples in every age - is ambition.

The apostles were constantly trying to jockey for the choicest cabinet secretariats in what they anticipated would be an earthly messianic reign. And they would do so at the most inhumanly brutal times, like immediately after Jesus had foretold his approaching sufferings.

Jesus, however, didn't crush their desire for greatness, but redirected it. He didn't want them competing for seats at table or fancy titles, but for a towel to wash others feet. He wanted them to be ambitious not for self-aggrandizement, for what St. James called "selfish ambition," but for bringing about the kingdom. He wanted them to be ambitious for the virtues of the kingdom.

Jesus wants us to be great in faith, praising the Syro-Phoenician mother and the Roman Centurion for their great faith and longed that all in Israel would emulate it.

Jesus wants us to be great in living by his truths and passing them on to others. "Whoever keeps these commandments and teaches others to do so will be called great in the Kingdom of heaven," he said in the Sermon on the Mount.

He wants us to be ambitious in our total imitation of his self-sacrificial love. "Whoever would be first among you must be the servant of all," he said. "For the Son of Man also came not to be served but to serve and to give his life as a ransom for many."

For us to live the Year of Faith well, we must be more childlike in our practice of the faith.

To be child-like doesn't mean to be childish. St. Paul summons us to "full stature in Jesus Christ," but our advance in Christian maturity is at the same time progress in childlike simplicity.

The truth is that often, as we get older, we cease to relate to God the way we should, as his beloved children. We may not act quite as poorly as the Prodigal Son in the parable, but we often just want to "grow up" and leave "home," to do things on our own, to be less dependent on Him than we were before and more self-reliant and self-sufficient. Whereas when we were a child and used to talk to the Father every day, now on our own we space out those interactions. We still love the Father, but less than we used to. When he offers to do something for us, we say, "Thanks, Dad, but I've got it covered."

To become like little children means to return to our true dependence on the Father and begin to allow him to continue to raise us to become perfected as he himself is perfect.

Back in 1997, the Church proclaimed as a doctor of the Church St. Therese Lisieux because she was precisely an expert in the way to grow in spiritual childhood. That way begins, she said, with grounding oneself in who the Father is, how much he loves us, and responding with love and trust as a child does to his or her parent.

"To remain little before God is to recognize one's nothingness, expect all things from the good God just as a little child expects all things from her father; it is not to be troubled by anything, not to try to be on the lookout for favors. Even among poor people, a child is given all it needs, as long as it is very little, but as soon as it has grown up, the father does not want to support it any longer and says: 'Work, now you are able to take care of yourself.' Because I never want to hear these words! . So I have stayed little. . To stay little means not attributing the virtues we practice to ourselves, under the impression that we are capable of such things, but to recognize that the good God places this treasure of virtue in the hand of His little child for him to use as he needs it; and that it remains God's treasure."

She linked two passages of the Gospel together to arrive at an important truth. Both passages point to a condition to enter into the kingdom of heaven. Jesus said in one place that to enter the Kingdom we need to convert and to become childlike; in a second he blessed the poor in spirit, saying theirs is the Kingdom. Becoming childlike and becoming poor in spirit are basically synonymous. Therese sought both. She aspired to be nothing more than "a poor little child" who looks to her Father for everything and who obtains everything from Him.

Once we grasp that we are poor little children, she added, then we learn how to relate to God and particularly to his merciful love.

Talking about the mercy of God, she encouraged everyone to follow her lead and grasp God by the "heart." She said, "Consider a small child who has displeased his mother, by flying into a rage or perhaps disobeying her; if he sulks in a corner and screams in fear of punishment, his mother will certainly not forgive his fault; but if he comes to her with his little arms outstretched, smiling and saying: 'Kiss me, I won't do it again,' surely his mother will immediately press him tenderly to her heart, forgetting all that he has done... Of course she knows quite well that her dear little boy will do it again at the first opportunity, but that does not matter; if he takes her by the heart, he will never be punished."

She encouraged everyone to have such trust in the Father's mercy, who loves us more than the most tender mother.

The way of spiritual childhood is acquired, she said, by learning how to imitate the child Jesus, who teaches us in a very concrete way to relate to God. Just as Jesus sleeps in Mary's and Joseph's arms, so we should entrust ourselves to the Father's arms, even if we need endure Jesus' sleeping in seeming not to respond to our prayers, or even if we're in the midst of a dark night.

"Sometimes," she wrote, ""when I read spiritual treatises in which perfection is shown with a thousand obstacles, surrounded by a crowd of illusions, my poor little mind quickly tires. I close the learned book that is breaking my head and drying up my heart, and I take up Holy Scripture. Then all seems luminous to me; a single word uncovers for my soul infinite horizons; perfection seems simple; I see that it is enough to recognize one's nothingness and to abandon oneself, like a child, into God's arms. Leaving to great souls, to great minds, the beautiful books I cannot understand, I rejoice to be little because 'only children, and those who are like them, will be admitted to the heavenly banquet."

Her ambition was simply to please God in the little things of every day. She wrote, "If you want to be a saint, it will be easy ... you have but one goal: to give pleasure to Jesus."

And she was very specific about the little things by which she attempted to please him: "I want to sanctify my heartbeats, my thoughts, my simplest actions, uniting them to his infinite merit.,"

John Paul II said in 1997 about Therese, "The way she took to reach this ideal of life is not that of the great undertakings reserved for the few, but on the contrary, a way within everyone's reach, the "little way," a path of trust and total self-abandonment to the Lord's grace. It is not a prosaic way, as if it were less demanding. It is in fact a demanding reality, as the Gospel always is. But it is a way in which one is imbued with a sense of trusting abandonment to divine mercy, which makes even the most rigorous spiritual commitment light."

She once wrote to one of the two priests she spiritually adopted, "My way is all confidence and love." She added, "I hope that one day Jesus will make you walk by the same way as me."

Today in the Gospel Jesus makes it clear that he wants us all to walk that way.
-----

Father Roger Landry is pastor of St. Bernadette Parish in Fall River, MA and national chaplain of Catholic Voices USA. His homilies and articles are found on catholicpreaching.com