Free World Class Education
FREE Catholic Classes
On Pentecost weekend I had the privilege of serving as a deacon at the altar alongside of Fr. Paul Chaim Schenck

We need to hear the good news! There are priests who are faithfully serving the Church and her  mission. Priests like Fr. Paul Chaim Schenck. They are humble, properly submitted to the authority of the Church and bearing tremendous fruit. 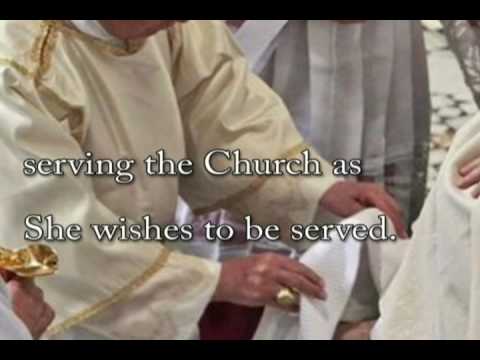 P>CHESAPEAKE, VA. (Catholic Online) - Like many Catholics I have been deeply saddened by the unfolding saga concerning priest/television personality Fr. John Corapi. As the Editor of Catholic Online, I knew this was a news story we had to cover - and we did. However, we avoided entering into the continuing flurry of controversy concerning this tragic case.

On the positive side, it has prompted me to spend time every morning thanking the Lord for the wonderful priests I have had the privilege of knowing and serving alongside of. It also led me to a renewed commitment to prayer on behalf of all priests. Finally, it has prompted my decision to spend time writing about priests who are demonstrating sacrificial love for the Lord and His Holy Church, fidelity, humility and holiness of life.

On Pentecost weekend I had the privilege of serving as a deacon at the altar alongside of one such priest, Fr. Paul Chaim Schenck.

Fr. Schenck celebrated all of the weekend Masses in our growing parish in Southeastern Virginia when our pastor was out of town. He also heard confessions. He spoke at a breakfast sponsored by our Knights of Columbus chapter, sharing his extraordinary journey in a talk entitled "From Protestant Pastor to Catholic Priest: A Pro-Life Journey". That weekend was the first anniversary of his ordination to the Catholic Priesthood and it was eminently clear that the Lord had called him to this beautiful vocation.

As a deacon of the Church it was deeply moving to witness the beauty with which this Priest of Christ offered the Holy Sacrifice of the Mass and ministered to Christ's faithful at the altar and the ambo. I literally wept as I knelt next to him at the elevation. It was a moving experience for many reasons, including the fact that I have known him for decades and was overjoyed that his journey into the Church brought him to the altar as a Catholic priest.

My history with Fr. Paul Schenck spans decades. I first met his brother Rob who introduced me to Paul. Both shared an untiring dedication to bringing an end to the killing of our youngest neighbors in the womb by abortion. They also shared an interesting faith journey. They were raised in a Jewish home, came to faith in the Lord Jesus as teenagers and went on to become Protestant ministers.

The two brothers were Pro-Life leaders in the Buffalo, New York. I went to Law School to help overturn Roe v Wade. So, later when I was asked by them to come to Buffalo years later to speak on behalf of Paul who had been wrongfully arrested for peacefully distributing Pro-Life literature, I agreed. At the time I was a Dean at the Franciscan University of Steubenville and engaged in a limited Pro-Life law practice.

In 1991 I moved to Virginia Beach to help build the American Center for Law and Justice. (ACLJ) Those were days of what I call "trench ecumenism" and the greatest example was the Pro-Life movement. This kind of cooperation is accepted now. Back then, it was highly controversial in both Catholic and Protestant circles. As I think back I am reminded of the country song, "I was Country when Country wasn't Cool".  We were doing Catholic/Evangelical cooperation long before it was "cool".

The first legal case I took as Executive Director of the ACLJ involved Rev. Paul Scheck. He had been  wrongfully arrested for distributing Pro-Life literature in front of an abortion facility. Back then there were "floating buffer Zones" which prevented Pro-Life Speech. I argued they violated the First Amendment. We lost at the Federal District Court level but the case continued on appeal. Years later I served as co-counsel when Jay Sekulow successfully argued the case at the US Supreme Court. It was styled "Rev. Schenck v. Pro-Choice Network".

Paul's courageous efforts for the children and Jay's skillful argument that Pro-Life speech is indeed protected by the First Amendment to the US Constitution, won the day. Paul was completely vindicated and earned a place in the legal history of the great human rights movement of our age. His courage has clearly informed his life's vocation now as he serves as a courageous, faithful and fruitful  Catholic Priest and continues to help build a new culture of life.

During those 'ACLJ years' my friendship with Paul - and his journey toward the Catholic Church - passed through a series of events. I was deeply impressed with his leadership gifts and abilities. I was also appalled that his valiant efforts to stop the killing of our first neighbors brought him to house arrest. So, I hired him as the Vice President of the American Center for Law and Justice while he was still wearing a court ordered ankle monitor. He was a hero to me then, and he still is.

Paul and his family moved to Virginia Beach, Virginia. Along with the growth of the ACLJ, our friendship grew. We shared a deep love for the early Fathers of the Church and loved to speak of theological truth. I watched as the Holy Spirit was drew Paul out of a Protestant vision of the Church and into an increasingly Catholic vision. When he became an Episcopal minister, I was there. I knew it would not satisfy his hunger. I believed he was hungering for the fullness of the Catholic Church and it was only a stop along the way home.

At his ordination to ministry as a priest in the Episcopal Church, I gave him a copy of the Catholic Liturgy of the Hours (the breviary) which I had engraved to "Fr. Paul Chaim Schenck'. I hoped it would prove to be prophetic. Paul came to my ordination to the Order of Deacon in the Catholic Church in 1996. The grace of that ordination called me out of the ACLJ and into a new chapter in my vocational calling in 1997.

Right before I left the ACLJ I introduced Paul to a dear friend, A Melkite Greek Catholic Bishop who played a significant role in his continuing journey to the Catholic Church. I had been invited my Bishop friend to travel to the Holy Land with the Bishop where I hoped to meet my life champion, Blessed John Paul II.

Paul's journey continued. In  2004 I served as the Deacon at the Mass where Fr. Frank Pavone received him into full communion with the Catholic Church. Paul laid aside his ordained ministry in the Episcopal Church to become a Catholic. I watched him go through what I have watched others go through who have walked the same road.

His hunger for the fullness of the truth found within the Catholic Church led him home. However, I believed that the Lord had called him to ordained ministry and would make a way. In fact, the Lord did, years later, through the pastoral provision for former Anglican ministers.

The evening before his ordination to the Catholic priesthood in 2010 he showed me the worn copy of the Liturgy of the Hours I had given him all those years ago, inscribed to "Fr. Paul Chaim Schenck" and smiled broadly. With a dispensation from Rome waiving the celibacy requirement, Fr. Paul was ordained to the Holy Priesthood of the Roman Catholic Church on the Feast of the Immaculate Heart of Mary by his friend, Bishop Victor Galeone of St. Augustine, Fla.

I sat next to my brother deacons and behind the numerous priests who were present and wept through most of the exquisitely beautiful ordination to the holy priesthood. His wife and children were there, along with a Church filled with people whose lives have been touched by his service to the Lord. They came from his days as a Pro-Life champion, an Assemblies of God Pastor, an Episcopal minister and now, as a Catholic Priest.

Fr. Paul is a priest of the Roman Catholic Diocese of Harrisburg where he is Director of the Respect Life Office. He is also the founding Director of the National Pro-Life Center (NPLC) on Capitol Hill in Washington, DC and serves as its Chairman. The Center gives the Justices of the Supreme Court, their high level staff, members of the federal judiciary, members of the US Senate and other public policy makers the information, education and inspiration they need to better form their consciences so they will make better decisions and help to build a truly just society for all men and women, including our first neighbors in the womb.

It is wonderfully ironic that this Pro-Life champion who suffered the brunt of injustice in the Courts now ministers to those who administer Justice. His Pro-Life work continues to grow on a National level. As we watched a once high profile priest set aside his priestly ministry in the midst of a terrible controversy - we need to pray a renewal of the priesthood and an increase in priestly vocations.

We also need to hear the good news! There are priests who are faithfully serving the Church and reaching out to help build a new culture of life and civilization of love, like Fr. Paul Chaim Schenck. They are humble, properly submitted to the authority of the Church and bearing tremendous fruit in this new missionary age. The best response to priestly scandals is to honor and pray for faithful Priests, like my friend, Fr. Paul Schenck.