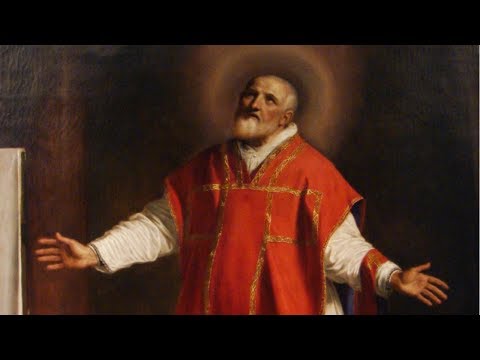 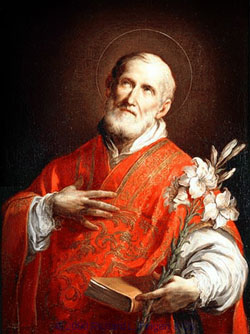 St. Philip Neri was a Christian missionary and founder of the Congregation of the Oratory, a community of Catholic priests and lay brothers.

He was born in Florence on July 21, 1515 as one of four children to Francesco Neri.

From a very young age, Philip was known for being cheerful and obedient. He was affectionately referred to as "good little Phil." He received his early teachings from friars at the Dominican monastery in Florence, San Marco.

At 18-years-old, Philip went off to live with a wealthy family member in San Germano. He was sent there to assist in - and possibly inherit - the family business. However, soon after his arrival, Philip experienced a mystical vision, which he eventually spoke of as his Christian conversion. This event was an encounter with the Lord and it dramatically changed his life.

He soon lost interest in owning property or participating in business. He felt a call from the Holy Spirit to radically live for and serve the Lord Jesus Christ and His Church.

So, Philip set out for Rome.

Once in Rome, Philip was the live-in tutor for a fellow Florentine's sons. Under Philip's guidance, the two boys improved in all aspects of life and faith, proving Philip's special talent with human relationships and in bringing out the best in people.

During his first two years in Rome, Philip spent his time in a solitary life. He also dedicated a lot of time to prayer. He ate very small meals of bread, water and a few vegetables, practicing an ascetical life.

In 1535, Philip began studying theology and philosophy at the Sapienza and at St. Augustine's monastery. Although he was considered a "promising scholar," after three years of studies, Philip gave up any thought of ordination. He set out to help the poor people of Rome and to re-evangelize the city. Sadly, Rome had lost its first love and its inhabitants were no longer really living as Christians.

He began talking to people on street corners and in public squares; he made acquaintances in places where people commonly gathered.

Philip, compared to Socrates, had a knack for starting up conversations and leading his listeners to consider a new and better way of life, the Christian Way. He easily caught others' attention with his warm personality and incredible sense of humor. He encouraged groups of people to gather for discussions, studies, prayer and the enjoyment of music. His customary question was always, "Well, brothers, when shall we begin to do good?"

Losing no time in converting good conversation to good actions, Philip would lead his followers to hospitals to wait on the sick or to the Church, to pray to and encounter Jesus Christ.

In short, Philip was an evangelist. He loved to share the Gospel and help people to find or rediscover their faith in Jesus Christ.

His days were dedicated to helping others, but his nights were set aside for solitude spent praying in the church or in the catacombs beside the Appian Way.

In 1544, on the eve of Pentecost, Philip saw what appeared to be a globe of fire. It is said the fire entered his mouth, causing Philip to feel his heart dilate. Philip was filled with such paroxysms of divine love that caused him to scream out, "Enough, enough, Lord, I can bear no more." Philip then discovered a swelling over his heart, though it caused him no pain.

In 1548, with the help of his confessor, Father Persiano Rossa, Philip founded a confraternity for poor laymen to meet for spiritual exercises and service of the poor, the Confraternity of the Most Holy Trinity.

Philip's appealing nature won him over friends from all societal levels, including that of Ignatius of Loyola, Pius V and Charles Borromeo.

At 34-years-old, Philip had already accomplished so much, but his confessor was determined that his work would be more effective as a priest. Finally convinced, Philip was ordained to the diaconate and then to the priesthood on May 23, 1551.

From there, Philip went to live with Father Rossa and other priests at San Girolamo and carried on his mission, but mostly through the confessional.

Before sun up, until sun down, Philip spent hours sitting and listening to people of all ages. Sometimes Philip broke out informal discussions for those who desired to live a better life. He spoke to them about Jesus, the saints and the martyrs.

Influenced by St. Francis Xavier, Philip thought of going to India to join the foreign mission field, but was dissuaded by his peers because Rome still needed Philip's ministry and influence.

A large room was built above the church of San Girolamo to tend to Philip's growing number of pilgrims and other priests were called on to assist him. Philip and the priests were soon called the "Oratorians," because they would ring a bell to call the faithful in their "oratory."

The foundation of the Congregation of the Priests of the Oratory would be laid a few years later with members who encouraged others to deepen their faith. Philip's rule for them was simple - share a common table and to perform spiritual exercises. Philip didn't want his followers to bind themselves to the life with a vow and he did not want them to denounce their property.

Philip's organization was officially approved by Pope Gregory XIII in 1575.

The Congregation was given an ancient church, but Philip made the quick decision to demolish it because the structure was in ruins and the size was not large enough. He had plans of rebuilding on a larger scale. People from all over, including Charles Borromeo and Pope Gregory, contributed financially toward the rebuilding.

By April 1577, the New Church was completed enough for the Congregation of the Oratory to be transferred there, but Philip stayed at San Girolamo for another seven years.

Philip was constantly in a crowd of people; he allowed his followers free access to him and continued hearing confessions and engaging in ministry and prayer.

In the words of one of his biographers, Philip was "all things to all men.... When he was called upon to be merry, he was so; if there was a demand upon his sympathy, he was equally ready..."

Philip was respected and loved throughout Rome; he became a trusted advisor to popes, kings, cardinals and equally as important to the poor.

He whole-heartedly desired the reform of the Catholic Church and worked toward that with a sense of gentleness and friendship, rather than criticism and harshness.

His efforts to reach out to the lay people of Rome and not simply associate with the clergy made him one of the great figures in the Counter Reformation of the Catholic Church. Sadly, the Catholic Church had fallen into clericalism. He soon earned the title, "Apostle of Rome."

On the Feast of Corpus Christi, May 25, 1595, Philip was told by his physician that he was not healthy. He had not looked well for ten years. Philip realized his time had come to pass on to the Lord. For the remainder of the day, he listened to confessions and saw his visitors as normal.

Before heading off to bed, Philip stated, "Last of all, we must die."

Around midnight of May 26, 1595, Philip suffered from a hemorrhage and passed away at 80-years-old. His body lays in the New Church, where the Oratorians still serve.

He is the patron saint of Rome, US Special Forces, humor and joy and his feast day is celebrated on May 26. 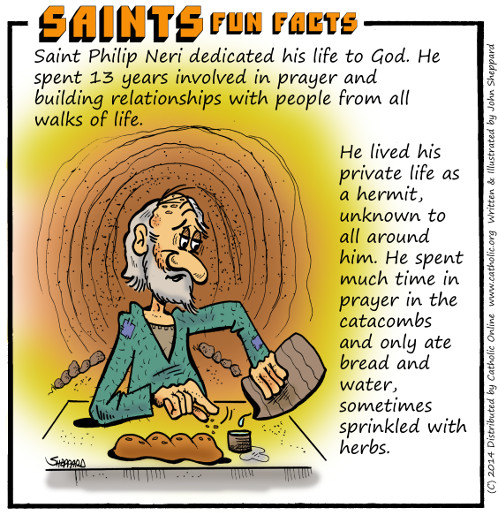