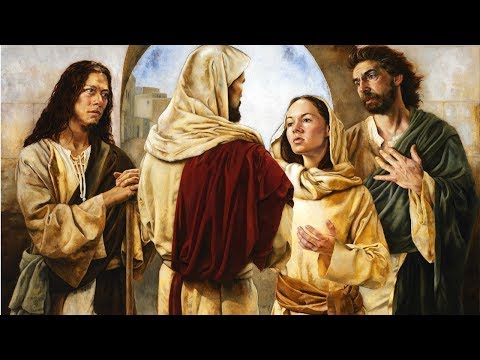 "Jesus loved Martha and Mary and Lazarus." This unique statement in John's gospel tells us of the special relationship Jesus had with Martha, her sister, and her brother.

Many of us find it easy to identify with Martha in the story Luke tells. Martha welcomes Jesus and his disciples into her home and immediately goes to work to serve them.

Hospitality is paramount in the Middle East and Martha believed in its importance. Imagine her frustration when her sister Mary ignores the rule of hospitality and Martha's work in order to sit and listen to Jesus. Instead of speaking to her sister, she asks Jesus to intervene.

Jesus' response is not unkind, which gives us an idea of his affection for her. He observes that Martha is worried about many things that distract her from really being present to him. He reminds her that there is only one thing that is truly important -- listening to him. And that is what Mary has done.

In Martha we see ourselves -- worried and distracted by all we have to do in the world and forgetting to spend time with Jesus. It is, however, comforting to note that Jesus loved her just the same.

The next visit shows how well Martha learned this lesson. She is grieving the death of her brother with a house full of mourners when she hears that Jesus has just come to the area. She gets up immediately and leaves the guests, leaves her mourning, and goes to meet him.

Her conversation with Jesus shows her faith and courage. In this dialogue she states clearly without doubt that she believes in Jesus' power, in the resurrection, and most of all that Jesus is the Son of God.

Jesus tells her that he is the resurrection and the life and then goes on to raise her brother from the dead. Our final picture of Martha in Scripture is the one that sums up who she was.

Jesus has returned to Bethany some time later to share a meal with his good friends. In this home were three extraordinary people. We hear how brother Lazarus caused a stir when was brought back to life.

We hear how Mary causes a commotion at dinner by annointing Jesus with expensive perfume. But all we hear about Martha is the simple statement: "Martha served." She isn't in the spotlight, she doesn't do showy things, she doesn't receive spectacular miracles. She simply serves Jesus.

We know nothing more about Martha and what happened to her later. According to a totally untrustworthy legend Martha accompanied Mary to evangelize France after Pentecost.

But wouldn't it be wonderful if the most important thing that could be said about us is "They served"?

Martha is the patron saint of servants and cooks.

Dorothy Day said: "If everyone were holy and handsome, it would be easy to see Christ in everyone. But it was not Christ's way for himself. Ask honestly what you would do when a beggar asked at your house for food.
Would you give it on an old cracked plate, thinking that was good enough? Do you think that Martha and Mary thought that the old and chipped dish was good enough for their guest?
It is not a duty to help Christ -- it is a privilege." In what ways do you serve Christ others grudgingly or sparingly? How can you serve them the way Martha served Christ, putting her whole self into it?

Saint Martha, pray for us that we might serve Jesus better.
Help us to overcome our distractions and worries to listen to his words and be present to him this day.
Amen.