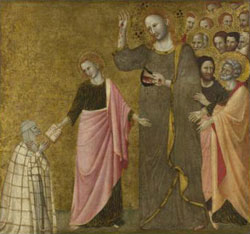 Of a wealthy family, Clare Agolanti was born at Rimini, Italy, was married when young, was exiled after her husband's death, and on her return saw her father and brother hanged by a rival political faction. She remarried, and after having a vision of Mary one day when she was thirty-four, she became a Franciscan tertiary, abandoned her luxurious style of living, and soon after built a convent for a group of women under her direction. She practiced mortifications and penances that were so extreme she was imprisoned for a time as insane. During the last days of her life she experienced ecstasies that left her blind and mute. She died at Rimini on February 10. Soon after her death, a cult developed at Rimini, which was authorized by Pope Pius VI in 1784. Her feast day is February 10th.