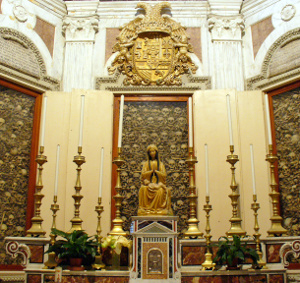 Saint Antonio Primaldo and the Martyrs of Otranto

Antonio Primaldo was martyred in 1480 by Ottoman invaders after he refused along with approximately 800 others, to convert to Islam. Primaldo will be beautified and elevated to sainthood in a ceremony on May 12, 2013 by Pope Francis.

In 1480, an Ottoman force arrived by sea in the southern tip of the Italian boot, at the town of Otranto. Ontranto at that time was a small, fortified town of about 6,000 inhabitants.

The Ottomans immediately attacked the town, bombarding it indiscriminately. The asked for the town's surrender the next day, which was summarily refused. Thus scorned, the Ottomans resumed their bombardment compelling the civilians to retreat into the small citadel there.

That retreat and the subsequent entry into the town by the Ottoman invaders, initiated a 15-day siege during which the inhabitants remained steadfast.

A final assault was ordered on the citadel by the Ottoman commander, Gedik Ahmed Pasha. That assault broke through the defenses and subsequently all men over the age of 15 were slaughtered. The women and children were enslaved.

A number of people still managed to survive and escape and took refuge in the local cathedral to pray with their elderly archbishop, Stefano Pendinelli. Pasha entered the cathedral and demanded their conversion to Islam. All refused and most were immediately beheaded.

On August 14, about 800 survivors including Antonio Primaldo were bound with ropes and transported to a local hilltop where they were to be executed, their families compelled to watch and even assist in the killings.

Primaldo was the first victim and was beheaded whilst standing. Legend says his body remained standing, and despite efforts to push it over, remained upright until the last victim was killed. This miracle was said to cause the conversion of an Ottoman officer called Bersabei, who became Christian. For this conversion, he was impaled by his own men.

The other 800 martyrs were systematically killed by beheading.

The following year, on October 13, the bodies of the buried martys were discovered to be uncorrupted, showing no signs of decay. This was regarded as a great sign and the bodies were transferred to the city's cathedral. Some of the bodies were taken to Naples and buried under the altar of Our Lady of the Rosary in the church of Sant Caterina a Formiello.

The town of Otranto was eventually recaptured by an army led by Alfanso of Aragon, son of the king of Naples.

The remains of the martyrs were later moved to a reliquary chapel and are now housed under an altar there.

In subsequent years, several miracles have been attributed to Primaldo and the martyrs. The canonical process to beautify the 800, including Primaldo, began in 1539 and ended only in 1771, demonstrating the slow, careful pace at which the Church declares persons to be saints.

They were beautified by Pope Clement XIV on December 14, 1771.

The martyrs and Primalso will be canonized on May 13, 2013 by Pope Francis.

Notably, the announcement of their canonization came from Pope Benedict during the same presentation where he announced his retirement from the papacy.

The only known reference to him is via a book written by Odo of Cluny who lived from 879-942 and who never met Gerald. Odo however wrote that he did extensive research into Gerald's life and concluded that he was in fact, a saint.

During the course of his investigation into Gerald's life, Odo confessed that there were many reasons to doubt Gerald's sainthood. Chief among them was that Gerald was not a member of an established order of clergy, but rather lived his life as a wealthy, lay noble.

Gerald was known for being chronically ill throughout his life, possibly suffering from severe acne which left his face scarred and he became blind in his later years.

Despite these physical concerns, Gerald was regarded as a kind and merciful noble, showing mercy to convicts and kindness to the poor. His desire was to become a monk, however his noble obligations made such a transition difficult.

Motivated by faith, Gerald sought to donate his lands to the Pope, but was dissuaded by his friend, Bishop Gausbert of Rodez, who persuaded him that he could do the most good by living a pious life in private and serving the needs of his people in public. Gerald did so.

Gerald shaved a small spot on his head as well as his beard, and concealed his private devotion to the Church so that he could retain public credibility and authority. During his time, Papal authority was waning and secular forces conspired to consolidate power away from the lesser nobility.

Gerald also took a private vow of chastity. He never married and produced no children. He spent considerable time in daily, devotional prayer.

Eventually, Gerald was able to make a pilgrimage to Rome and donate some of his lands to the Church. He also established a church and a monastery on his lands, which he deliberately established in such a way as to make the monastery independent of all control except Rome's.

Gerald was a model noble, bridging the gap between religious virtue and secular authority. He showed others that it is possible to wield power and wealth while living a pious and righteous life. The skeptical Odo eventually concluded that Gerald had in fact, become a saint upon his death.

St. Gerald's feast day is October 13. He is the patron saint of bachelors, counts, and the disabled, as well as the Upper Auvergne region of France where he lived.