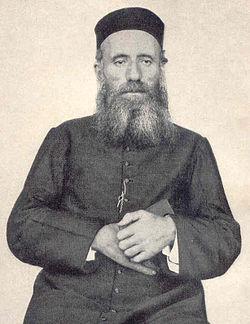 Saint Jacques Berthieu was a French Jesuit priest working in Madagascar when he was martyred by rebel tribesmen hostile to his faith.

Saint Berthieu was born in France on November 27, 1838, as one of seven children. As you youth, he felt a strong calling to serve God and he joined the Jesuits in October of 1873.

Just two years later, he joined a Jesuit mission to Madagascar. His talent and zeal made him a favorite in the order and he was soon appointed to be the superior of mission in Ambositra in 1885.

Working from his mission, St. Berthieu grew the faith, inviting many of the locals to God.

However, his mission because increasingly fraught with danger as some locals became increasingly hostile to French influence in the region. The hostility eventually grew so that the mission had to be repeatedly moved.

Eventually, moving the mission was not enough and in 1896, St. Berthieu was kidnapped during a rebellion.

St. Berthieu's had many chances to flee before being captured and possibly after, but he would not consider it, preferring instead to remain on task, shepherding as many of the people as he could toward Christ.

On June 8, 1896, he was presented to a rebel leader who offered him a position as an advisor. St. Berthieu refused this honor. After refusing, he was then given only seconds to choose between renouncing his faith and being put to death.

To which St. Berthieu replied, "My son, I'm sorry, that I cannot do. I prefer to die."

Death came quickly as several men with clubs descended upon him and beat him. After beating him nearly to death, the attackers finished by shooting him. His murderers cast his body into a nearby river.

After his death, locals began to report miracles as a result of drinking the waters in which he was cast. The miracles occurred in St. Berthieu's name and were also associated with greenery along the riverbank.

St. Berthieu was recognized as a saint by Pope Benedict XVI on October 21, 2012.