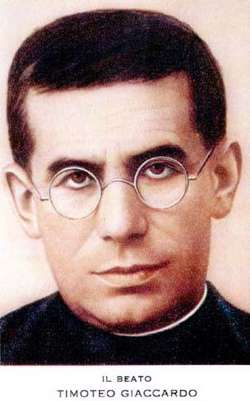 Blessed Timothy Giaccardo, the first member of the Pauline Family to be raised to the altars, has a special place in each Pauline's heart. As a young boy, Fr. Alberione picked him out and sent him to the seminary. Eventually he became not only Alberione's right hand man and a primary figure in the interpretation of the Pauline charism, he was also in a special way instrumental in the life of the congregation of the Pious Disciples of the Divine Master, the third community founded by Alberione.Father Timothy Giaccardo was proclaimed "blessed" by Pope John Paul II on October 22, 1990.