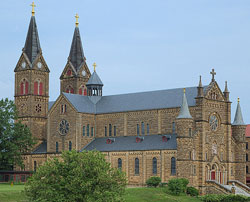 St. Meinrad, martyr is venerated as the patron and in some sense the founder of the Benedictine abbey of Einsiedeln in Switzerland which has kept an unbroken continuity since Carolingian times. He settled as a hermit at Einsiedeln, where he was murdered by two ruffians to whom he had given hospitality in 861. His feast day is January 21st.