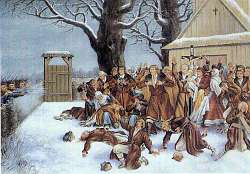 Onufry Wasyluk (1853 - January 24, 1874), was one of the Martyrs of Podlasie in 1874 were slain by troops of Tsar Alexander II of Russia, because they refused to follow the Byzantine liturgy. Pratulin was part of Russia.

The martyrs were beatified on October 6, 1996 by Pope John Paul II. Their feast day is January 24.