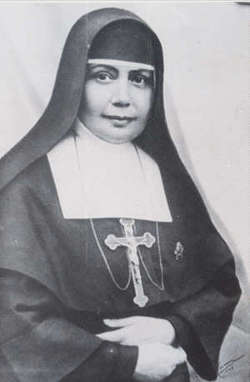 Nazaria Ignacia March Mesa was born January 10, 1889, in Madrid, Spain. At the age of 9 years felt the first call of the Lord: "You, Nazaria, follow me." At that Nazario said, "I will follow Jesus, as near as possible to a human creature."

For economic reasons, his family moved to Mexico and there joined with the Little Sisters of the Abandoned Elderly in 1908. After a few years was destined to Oruro, Bolivia and more than 12 years, he most earnestly to the care of the elderly, seeing them as members of Christ's body aching.

In the Spiritual Exercises of St. Ignatius of Loyola, in 1920, in the meditation of the Kingdom, was enshrined the ideals of working with all their forces for binding and extension of the Kingdom of Christ and developed a religious congregation as "a cross- love around the Church. "

On June 16, 1925, the Sisters Nazaria left to start the foundation of the new Congregation. And February 12, 1927, declared canonically diocesan religious Congregation of the Missionary Sisters of the Papal Crusade. On June 9, 1947, and died Nazaria Ignacia, the Institute received the final approval of the Constitutions and the name of the Church Missionary Crusades.

According to the Constitutions, written by Mother Ignacia Nazaria, "The Institute of the Pontifical Missionary Crusade, tends to make the women's social action." Mother will say: "In love, obey and cooperate with the Church's work of preaching the Gospel to every creature, is our life, what we are."

"This is our spirit warrior, faithful, no cowardice, all love, love above all to Christ and in Christ to all. Distributed among the poor, encouraging the sad, give a hand to the fallen, teach the children of the people from their bread with them, in short, to give all his life, his whole being to Christ, the Church and souls."

Nazaria Ignacia died in Buenos Aires, Argentina on July 6, 1943, leaving great reputation for holiness. She was beatified by S.S. John Paul II in Rome on September 27, 1992 and proclaimed his feast on July 6 each year.