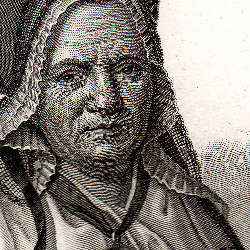 Blessed Martha Le Bouteiller was born as Aimee-Adele Le Bouteiller, in Percy, a villiage in the Manche Department of Normandy, France, in 1816. Her mother was widowed, so she spent much of her youth helping run the family farm. As she grew she started working as a housemaid to earn extra money to give to her mother.

As a young woman, Aimee-Adele found time to volunteer at her parish school, and attended pilgrimages with the children. Her parish community made annual pilgrimages to the shrine of Our Lady of Chappelle-sur-Vire.

In 1841, during one such pilgrimage, Aimee-Adele paid a visit to a dilapidated abbey, that of St. Sauveur le Vicomte. The abbey is the same one where St. Marie Madeleine Postel founded a religious congregation, the School Sister of Mercy. After her visit, Aimee-Adele became resolved to enter the convent.

As a sister, she took the name Martha, a name associated with hard work, and she worked very hard. Her assignments included working on the abbey farm, in the gardens, and helping with the laundry. Eventually she was assigned to the cellar where cider was made. Sister Martha was so skilled at making cider that she became known as "Sister Cider" to her friends.

During the Franco-Prussian War, French troops were quartered in the Abbey. During this time she provided noteworthy care for the soldiers, particularly ensuring that every soldier was fed and had wine. Amongst the soldiers this was greatly appreciated.

Sister Martha also formed a special bond with the abbey's superior, Mother Placide Viel. The bond was strengthened amid tension between Mother Placide, who was often away from the abbey to raise funds, and the superior's elder cousin, Sister Marie Viel, who ran the abbey during Placide's absence.

Despite their professional and familial relationship, the two cousins did not get along very well and Sister Marie often treated the younger Mother Placide, poorly. As Sister Martha sympathized with Mother Placide, the two women formed a lasting friendship.

The friendship of the two women has come to exemplify the bond of sisterhood and friendship that commonly forms between those who live a vocation of service.