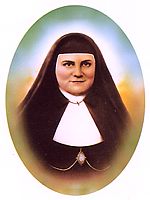 She was born into a poor family in Saragoza, Spain, on 27 July 1906. From her youngest years María shone with radiant love for God and for the poor; she was always trying to find ways to help the poor. After spending four years in Alfamen for health reasons, she returned to Zaragoza and began work in a shoe factory to help her family financially. There her simplicity, natural sympathy, kindness and diligence made her popular with one and all. However, the Lord wanted to lead her ever more deeply into the mystery of the Cross. María Pilar so loved suffering that she was in the habit of saying "In suffering I find so great a love for our Jesus that I die".

Returning from work one day in 1926, she fractured her pelvis falling from the tram; in 1927, an outbreak of cysts paralysed her and made her blind. Thus began for her a sorrowful way, between the hospitals of Zaragoza and her poor attic home. During the Spanish Civil War it was here that she prayed, cultivated evangelical friendships and helped many to discern God's call.

In 1936 María Pilar began to talk of a Work of Jesus whose purpose would be "to reproduce the active life of the Lord on earth through works of mercy". On 8 December 1939, the Feast of the Immaculate Conception, to whom she was deeply devoted, María Pilar was miraculously healed from the paralysis that had confined her to her bed for more than 10 years. The cysts disappeared and she instantly recovered her vision. In 1939, she went about setting up her missionary work, and with a group of young people, moved to Madrid where she could begin her work as an apostolate for the poor. The Bishop of Madrid gave her first foundation, "Missionaries of Jesus and Mary", a first official approval. However she ran into great difficulties and as a result, the bishop withdrew his approval and asked that the work be dissolved. She was forbidden to exercise any form of apostolate until 1942. In that year the Bishop of Madrid canonically approved a second form of her missionary work, known as the Pious Union of Missionaries of Jesus, Mary and Joseph.

After two years of a fruitful apostolate on the outskirts of Madrid, she fell ill again. At the same time, calumnies and plotting forced her to withdraw from her congregation in 1944, and she was followed by nine of her daughters. She died at San Sebastiano when she was only 39, on 27 August 1945. After her death the religious were able to realize her plan. In 1948, her religious obtained the approval of the bishop for a third and final form of congregation called the Missionary Work of Jesus and Mary.