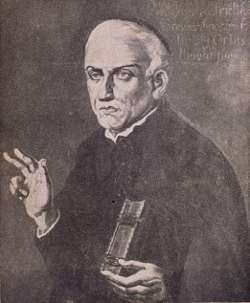 José de Anchieta (March 19, 1534 - June 9, 1597) was a Canarian Jesuit missionary to Brazil in the second half of the 16th century. A highly influential figure in Brazil's history in the 1st century after its discovery on April 22, 1500 by a Portuguese fleet commanded by Pedro Álvares Cabral, Anchieta was one of the founders of Săo Paulo, in 1554, and Rio de Janeiro, in 1565. He was a writer and poet, and is considered the first Brazilian writer. Anchieta was also involved in the catechesis and conversion to the Catholic faith of the Indian population; his efforts at Indian pacification, together with another Jesuit missionary, Manuel da Nóbrega, were crucial to the establishment of stable colonial settlements in the new country.