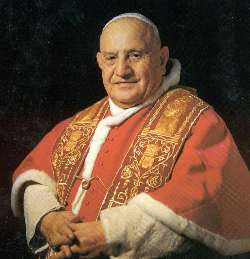 The man who would be Pope John XXIII was born in the small village of Sotto il Monte in Italy, on November 25, 1881. He was the fourth of fourteen children born to poor parents who made their living by sharecropping. Named Angelo Giuseppe Roncalli, the baby would eventually become one of the most influential popes in recent history, changing the Church forever.

Roncalli's career within the Church began in 1904 when he graduated from university with a doctorate in theology. He was ordained a priest thereafter and soon met Pope Pius X in Rome.

By the following year, 1905, Roncalli was appointed to act as secretary for his bishop, Giacomo Radini-Tedeschi. He continued working as the bishop's secretary until the bishop died in August 1914. The bishop's last words to Roncalli were, "Pray for peace."

Such words mattered in August 1914 as the world teetered on the brink of World War I. Italy was eventually drawn into the war and Roncalli was drafted into the Italian Army as a stretcher bearer and chaplain.

Roncalli did his duty and was eventually discharged from the army in 1919. Free to serve the Church in new capacities he was appointed to be the Italian president of the Society for the Propagation of the Faith, handpicked by Pope Benedict XV.

Then in February 1925, Roncalli was summoned to the Vatican and given a new mission. This time he was sent to Bulgaria as the Apostolic Visitor to that country. Later, he was appointed aspostolic delegate to Turkey and Greece and made archbishop of Mesembria.

Beginning in 1935, racial tensions and anti-Jewish sentiment began to explode into actual acts of violence against the Jews and other ethnic minorities. Roncalli started using his influence to save what people he could from the depredation of both local authorities and later the Nazis. During his tenure as archbishop, Roncalli saved thousands of Jews, enough that he was named a "Righteous Gentile" following the war.

In late 1944, the Church was anxious to remove clergy in France that had collaborated with the Nazis in various forms. Roncalli was appointed as the new papal Nuncio and sent to France to negotiate the retirement of bishops who were involved with the Nazis.

In 1952, Roncalli was offered a new position, this time as Patriarch of Venice. At the same time he assumed his new title, Roncalli became the Cardinal-Priest of Santa Prisca. He assumed his new responsibilities on March 15, 1953.

Roncalli's papal predecessor died on October 9, 1958 and he was soon summoned to Rome where he was to participate in the process of selecting a new pope. The College eventually settled on Roncalli for election and he accepted, saying "I will be called John," a surprising choice because of that name's association with schism.

As Pope John XXIII, he immediately began to change the culture in the Vatican. On Christmas, 1958, he resumed the papal practice of making visits to the community within the official Diocese of Rome. He visited the sick, the poor, and prisoners. He apologized for episodes of anti-Semitism within the Church carried on by some of his predecessors.

It was originally expected that Pope John XXIII would only serve a short time before passing away and that he would make no significant changes to Church practice. However, Pope John XXIII was a man of great mercy and kindness and much like Pope Francis of today, he did many things that created sensation in the streets and pews.

Perhaps his most influential decision was the call for an ecumenical council which would be known as Vatican II. As a result of this council, many practices of the classic Church would be altered with a new emphasis on ecumenism and a new liturgy.

Pope John XXIII addressed several topic of importance to Catholics around the world. He prohibited the use of contraceptives which interfere with the procreative will of God. He upheld the traditional view that married couples may not divorce. He also moved to protect the Church from scandal, ordering confidentiality when dealing with matters of clergy accused of the sexual abuse of children. How his request to the bishops of his time was interpreted remains subject to debate.

By late 1962, Pope John XXIII has executed most of the work for which he would be known. He was, like his own sister before him, diagnosed with stomach cancer, which was a terminal diagnosis for that time.

In his last months, he offered to negotiate peace between the Soviet Union and the United States, then at the height of the Cold War. The offer, although declined, was popular in both countries. In the wake of the news, John XXIII was the first pope to be honored as the Time Magazine Man of the Year.

The world mourned John XXIII and he was posthumously awarded the Presidential Medal of Freedom by President Johnson in December 1963.

Pope John XXIII generally maintained a good reputation among those who remembered him and he was often titled "the Good."

On September 3, 2000, Pope John Paul beatified him. Miracles were attributed to him and his body was found to be in an uncorrupted state, a phenomenon consistent with sainthood. His body was put on display for the veneration of the faithful.

Pope Francis approved John XXIII for canonization on June 3, 2013, the 50th anniversary of his death.

Pope John XXIII's feast day will be October 11, as opposed to the day of his death, which is June 3. This special feast day is intended as a commemoration of the opening of the Second Vatican Council on October 11, 1962.