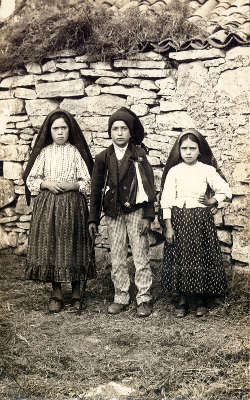 Francisco Marto (June 11, 1908 - April 4, 1919) and his sister Jacinta Marto (March 11, 1910 - February 20, 1920), also known as Saint Francisco Marto and Saint Jacinta Marto, together with their cousin, Lúcia dos Santos (1907-2005) were the children from Aljustrel near Fátima, Portugal, who witnessed three apparitions of an angel in 1916 and several apparitions of the Blessed Virgin Mary in 1917. Their reported visions of Our Lady of Fátima proved politically vcontroversial and gave rise to a major centre of world Christian pilgrimage.

The youngest children of Manuel and Olimpia Marto, Francisco and Jacinta were typical of Portuguese village children of that time. They were illiterate but had a rich oral tradition on which to rely, and they worked with their cousin Lúcia, taking care of the family's sheep.

According to Lúcia's memoirs, Francisco had a placid disposition, was somewhat musically inclined, and liked to be by himself to think. Jacinta was affectionate if a bit spoiled, and emotionally labile. She had a sweet singing voice and a gift for dancing. All three children gave up music and dancing after the visions began, believing that these and other recreational activities led to occasions of sin.

Following their experiences, their fundamental personalities remained the same. Francisco preferred to pray alone, as he said, "to console Jesus for the sins of the world". Jacinta was deeply affected by a terrifying vision of Hell reportedly shown to the children at the third apparition. She became deeply convinced of the need to save sinners through penance and sacrifice as the Virgin had reportedly instructed the children to do. All three children, but particularly Francisco and Jacinta, practiced stringent self-mortifications to this end.

In August 1918, just as World War I was ending, Francisco and his sister both contracted influenza. Just eight months later, Francisco knew his time was coming. He asked to receive the Hidden Jesus in Holy Communion. He died the next morning and was buried in a little cemetery in Fatima. He was later transferred to the Sanctuary at Cova da Iria.

On May 13, 2000, both Francisco and Jacinta were beatified and on May 13, 2017, on the 100th Anniversary of Fatima, Francisco Marto was canonized by Pope Francis.