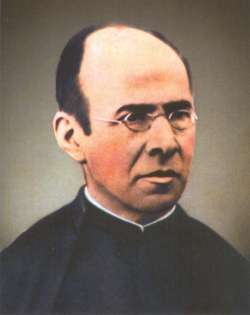 Faustino Miguez born in a village of River Acevedo, Celanova, in the province of Orense, on March 24, 1831. Faustino was the fourth son of a hard working Christian family. He entered the novitiate of the Pious Schools of San Fernando in Madrid, in 1850 where he took the habit Piarist on 5 December of that year, with the name of Faustino of the Incarnation.

In 1855, he was ordained deacon and priest on March 8, 1856 in the parish of San Marcos de Madrid by the Bishop of Osma Burgos. Faustino was a man that had God filling his heart. He worked diligently with children and young people, "his disciples, the poor, the sick and those who came to him experienced the goodness of his soul." He knows that life is a gift received in order to give generously. His favorite saying: "Let God work who knows what we need." Faustino passed on March 8, 1925.