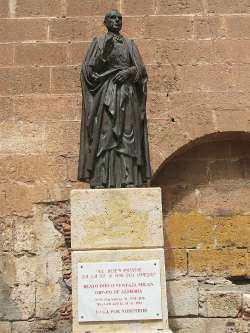 Diego Milan was a Spanish priest, bishop of Almería (1935-6), murdered at the beginning of the Spanish Civil War, a victim of religious persecution.

Born in Ohanes on July 22, 1880. His training in the Sacromonte Church culminated in the Gregorian University in Rome, where he earned a doctorate in philosophy and theology. Granada again rejoined the Sacromonte, first as chaplain and professor and four years later, as a canon. On July 16, 1935 was installed as bishop of Almeria.

On July 24, 1936 was forced to leave the Episcopal Palace and soon after was killed along with Manuel Medina Olmos, bishop of Guadix, and priests and Second Torcuato Perez Arce.