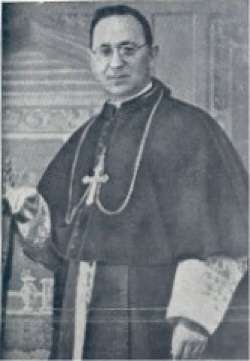 son of modest farmers, was born in Buenavista de Valdavia, Palencia, Spain, on 16 April 1881. He joined the Augustinian Order in Valladolid at the age of 15. He was later made Prior, an office he retained until he was sent to the Philippines as provincial councilor. He became Provincial Superior in 1932 and went to China, the United States, Colombia and Peru. In 1935 he was named Bishop of Teruel and Apostolic Administrator of Albarracin. He appointed BL FELIPE RIPOLL MORATA, a priest of great faith and humility, as Vicar General. Born in Teruel, Spain, on 14 September 1878 into a poor but devout family, Fr Ripoll was professor and spiritual director at the seminary and later became rector. Bishop Polanco and Fr Ripoll shared the same deep faith and love of prayer. When Teruel was taken by the Republican Army in 1938, Bishop Polanco stood by his people, earning their esteem. He resisted when pressed to remove his signature from the Spanish Bishops' Collective Letter denouncing the Church's persecution, aware of what his fate would be. Fr. Ripoll joined him and they were imprisoned for 13 months. At the end of the war (1939) they were used as a shield by disbanded soldiers and shot in a gorge near Gerona. Their remains are preserved in Teruel cathedral.