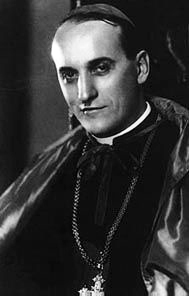 Aloysius Viktor Stepinac was a Croatian Catholic cardinal and Archbishop of Zagreb from 1937 to 1960. In 1998 he was declared a martyr and beatified by Pope John Paul II.

Stepinac was ordained on October 26, 1930 by archbishop Giuseppe Palica, and in 1931 he became a parish curate in Zagreb. He established the archdiocesan branch of Caritas in 1931, and was appointed coadjutor to the see of Zagreb in 1934. When Archbishop Anton Bauer died on December 7, 1937, Stepinac succeeded him as the Archbishop of Zagreb. During World War II, on 6 April 1941, Yugoslavia was invaded by Nazi Germany, who established the Ustaše-led Independent State of Croatia. As archbishop of the puppet state's capital, Stepinac had close associations with the Ustaše leaders during the Nazi occupation, had issued proclamations celebrating the NDH, and welcomed the Ustaše leaders. Stepinac also objected against the persecution of Jews and Nazi laws, helped Jews and others to escape and criticized Ustaše atrocities in front of Zagreb Cathedral in 1943.

After the war he publicly condemned the new Yugoslav government and its actions during World War II, especially for murders of priests by Communist militants. Yugoslav authorities indicted the archbishop on multiple counts of war crimes and collaboration with the enemy during wartime. The trial was depicted in the West as a typical communist "show trial", biased against the archbishop; however, some claim the trial was "carried out with proper legal procedure". In a verdict that polarized public opinion both in Yugoslavia and beyond, the Yugoslav authorities found him guilty of collaboration with the fascist Ustaše movement and complicity in allowing the forced conversions of Orthodox Serbs to Catholicism.

After foreign and domestic pressure, Stepinac was released from Lepoglava prison. In 1952 he was appointed cardinal by Pope Pius XII. Stepinac died while still under confinement in his parish, almost certainly as the result of poisoning by his Communist captors. In October 3, 1998, Pope John Paul II declared him a martyr and beatified him before 500,000 Croatians in Marija Bistrica near Zagreb. This again polarized public opinion.