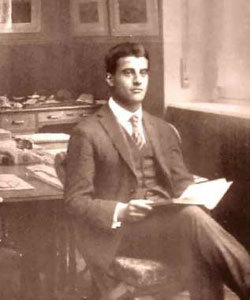 He was born in Turin into a wealthy family, who owned a newspaper called La Stampa. Though an average student, Frassati was known among his peers for his devotion and piety.

He was dedicated to works of social action, charity, prayer and community. He was involved with Catholic youth and student groups, the Apostleship of Prayer, Catholic Action, and was a third order Dominican. He would often say, "Charity is not enough; we need social reform." He helped establish a newspaper entitled Momento, whose principles were based on Pope Leo XIII's encyclical: Rerum Novarum.

Despite his family's enormous wealth and power, Frassati's father was austere and never gave his children too much spending money. Frassati, however, donated most or all of his money to people he saw as more "needy" than him, and as a result he became accustomed to giving his train-fare to the poor and running back home or riding in third class.

Despite the many organizations to which Frassati belonged, he was not a passive "joiner"; records show that he was active and involved in each, fulfilling all the duties of membership. He was strongly anti-fascist and did nothing to hide his political views.

Participating in a Church-organized demonstration in Rome, he withstood police violence and rallied the other young people by grabbing the banner which the police had knocked out of someone else's hands. He held it even higher while using the pole to ward off their blows. When the demonstrators were arrested by the police, he refused special treatment that he might have received because of his father's political position, preferring to stay with his friends. One night a group of fascists broke into his family's home to attack him and his father, but Frassati beat them off single-handedly chasing them down the street.

Frassati died in 1925 of poliomyelitis. His family expected Turin's elite and political figures to come to offer their condolences and attend the funeral; they naturally expected to find many of his friends there as well. They were surprised, however, to find the streets of the city lined with thousands of mourners as the cortege passed by. Poor people from the city petitioned the Archbishop of Turin to begin the cause for canonization. The process was opened in 1932 and he was beatified on 20 May 1990. Blessed Pier Giorgio Frassati's feast day is 4 July.

Frassati was called Man of Eight Beatitudes by Pope John Paul II, who beatified him on 20 May 1990.

Frassati is the Patron Saint of Bishop McGuinness High School in Oklahoma, where Frassati's family blessed the school in his spirit.