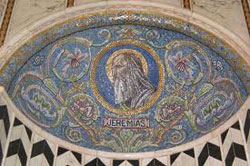 Elias and four companions, Daniel, Isaias, Jeremy, and Samuel were Egyptians who visited Christians condemned to work in the mines of Cilicia during Maximus' persecution, to comfort them. Apprehended at the gates of Caesarea, Palestine, they were brought before the governor Firmilian, and accused of being Christians. They were all tortured and then beheaded. When Porphyry, a servant of St. Pamphilus, demanded that the bodies be buried, he was tortured and then burned to death when it was found that he was a Christian. Seleucus witnessed his death and applauded his constancy in the face of this terrible death; whereupon he was arrested by the soldiers involved in the execution, brought before the governor, and was beheaded at Firmilian's order. Feast day is February 16.