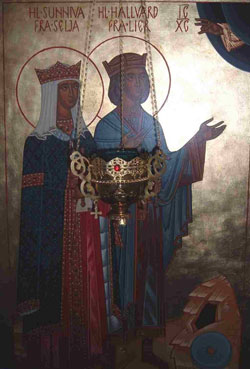 According to tradition, Hallvard was a Norwegian, son of Vebjorn of Husaby. He became a trader in the Baltic Islands. While defending a woman who bought sanctuary on his ship from three men accusing her of theft (he offered to make restitution to them), he was killed, with the woman, by arrows from the men. Though they attached a stone to his body when they cast it into the sea, it came to the surface, and the whole story came out. He has long been revered as a martyr for his defense of an innocent person and is the patron saint of Oslo. His feast day is May 15.