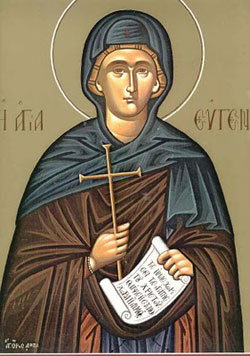 There definitely was a Roman martyr named Eugenia but the rest of her story is a romantic fictitious legend. According to it she was the daughter of Duke Philip of Alexandria, governor of Egypt during the reign of Emporer Valerian. She fled her father's house dressed in men's clothing and was baptized by Helenus, bishop of Heliopolis, who sent her to an abbey of which she later became abbot. Accused of adultery by a woman she had cured of a sickness and whose advances she had resisted, she was hailed before a judge to answer the charges; the judge was her father. Exonerated when she revealed she was a woman and his daughter, she converted him to Christianity (he later became a bishop and was beheaded for his faith). Eugenia converted many others, including her mother, Claudia, and suffered martyrdom by sword for her faith in Rome, where she had gone with her mother. Her feast day is December 25th.