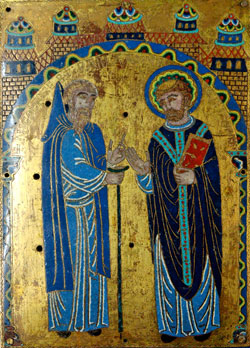 The early life of Stephen, a native of Thiers, France, is uncertain due to historical inaccuracies in the medieval biography of the saint. Nonetheless, his undertaking of consecrated life as a hermit is related in moving and convincing detail. Having built for himself a small hermitage on the mountain of Muret, Stephen vowed himself to God thus: "I, Stephen, renounce the devil and all his pomps, and offer myself to God the Father, Son, and Holy Spirit, the one true God in three Persons." He also prayed to the Blessed Virgin Mary, declaring, "Holy Mary, Mother of God, I commend my body, soul, and senses to your Son and to you." Thereafter, Stephen spent the next forty-eight years of his life in this wilderness, devoting himself to prayer and penitential self-denial. When on one occasion two papal legates visited him, they inquired as to whether he was a monk, a hermit, or a canon. He replied, "I am a sinner." Other men intending to imitate Stephen came to join him, so that the hermitage of Muret grew into a monastic community and a new religious congregation that would later be known as the Order of Grandmont.
Continue reading about St. Stephen of Muret