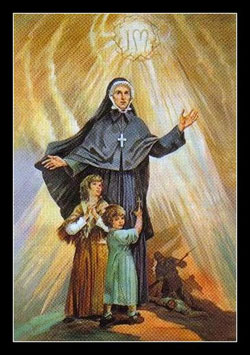 On a January day in 1794, the nineteen-year-old Claudine Thevenet, of Lyons, France, was horrified to discover her two brothers in a line of prisoners being taken to execution by agents of the despotic anti-Catholic Jacobin regime of the French Revolution. She followed them to the execution site, where the two young men, before dying, shouted to her, "Forgive, as we also forgive." In accord with her brothers' instruction, Claudine crossed her hands over her heart and prayed, "My God, forgive these murderers. They do not know what they are doing." She was so traumatized by the sight of her brothers' execution that, for the rest of her life, she suffered from shortness of breath and spasms of head tremors. Claudine's grief inspired her to devote herself to the care of the needy and the spiritual and moral formation of girls through the foundation of a new women's religious institute, the Congregation of Jesus and Mary. As mother superior, she took the name, Mary of Saint Ignatius. Recognizing the need for wholesome literature, she also founded a residence for Catholic women authors.
Continue reading about St. Claudine Thevenet