Feastday: May 23
Patron: of adopted children 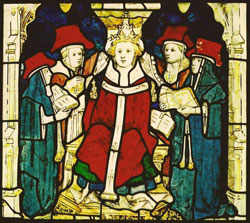 St. William of Rochester whose feast day is May 23rd is the patron saint of adopted children. William was a well-to-do burgher at Perth, Scotland. He went on pilgrimage to Jerusalem with his adopted son David who murdered him near Rochester, England. When a mentally deranged woman found his body and cared for it, she was miraculously cured of her mental problems. Reportedly miracles occurred at his grave, and it is said that he was canonized by Pope Alexander IV in 1256, though there is no record of such a canonization. There is a shrine dedicated to William at Rochester Cathedral.