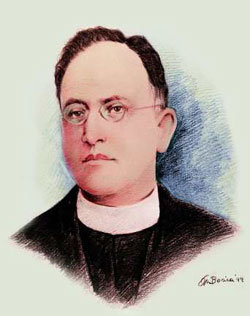 The son of a very poor family, Justino Orona Madrigal, of Atoyac, Mexico, was ordained a priest at the age of twenty-seven after having interrupted his seminary studies for several years to work in support of his parents. A dedicated pastor, he founded a religious congregation for the care of orphans and other needy children, the Claretian Brothers of the Sacred Heart. As the anti-Catholic Mexican government was intensifying its persecution of the Church, Father Orona was advised to flee, to which he replied, "I am here with my people, live or die." To continue serving his parishioners, he had to go into hiding, taking refuge at a nearby ranch together with the assistant priest of his parish, (Saint) Atilano Cruz Alvarado. Here the two priests said the rosary together and discussed their plans for continuing their pastoral labors. At dawn on July 1, 1928, forty government troops stormed the ranch house. Opening the door of his room to the invaders, Father Orona bravely shouted, "Long live Christ the King!" Instantly the soldiers gunned him down.
Continue reading about St. Justino Orona Madrigal