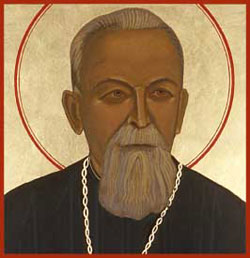 Having entered the Order of the Most Holy Redeemer, Vasyl Velychkovsky, of Ivano-Frankivsk, Ukraine, was ordained a Byzantine Rite Catholic priest at the age of twenty-two. In 1945, while serving as hegumenos (prior) of his order's monastery in Ternopil, Father Velychkovsky was arrested by the Russian Communists' secret police (the KGB) and sentenced to death. The sentence was subsequently commuted to a ten-year prison term of hard labor. Following his release in 1955, Father Velychkovsky resumed his priestly labors. In 1963, he was secretly consecrated metropolitan (archbishop) of Moscow by his predecessor in this office, who had just been ordered to leave the country by the Soviet government. In 1969, Metropolitan Velychkovsky was again arrested and imprisoned. Three years later, he was deported out of the Soviet Union. Stricken with a heart disease stemming from his imprisonment, the metropolitan told a Canadian audience, "The prisons and camps ruined my health and my strength, but this was my fate; the Lord God placed this cross on my shoulders." Metropolitan Velychkovsky died two weeks later, on June 30, 1973.
Continue reading about Bl. Vasyl Velychkovsky