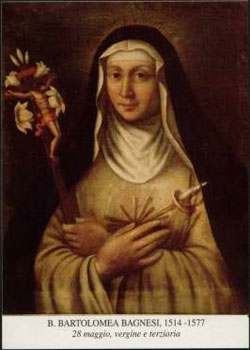 Pious from her childhood, Mary Bartholomea de Bagnesiis, of Florence, Italy, longed to become a nun so intently that upon learning of her father's plans to make her marry, she grieved to the point of falling gravely ill. She remained bedridden for most of the remaining years of her life. Amidst much physical suffering, Bartholomea served those who came to her bedside, converting sinners, reconciling enemies, and consoling the sorrowful. At the age of thirty-two, she became a Third Order Dominican. Bartholomea was granted the special privilege of having Mass celebrated in her own room. She received Holy Communion three to six times a week, preparing beforehand with great care and spending much time afterward in mental prayer. Deeply devoted to the Blessed Virgin Mary, she was wont to call her "the Mother of my most sweet Spouse." She experienced a vision of Mary in which the Madonna appeared first with the Christ Child on her lap, and afterwards as the Pieta, with the dead Christ in her arms. At the end of Bartholomea's life, five priests at her deathbed read to her one of the Gospel accounts of the Passion.