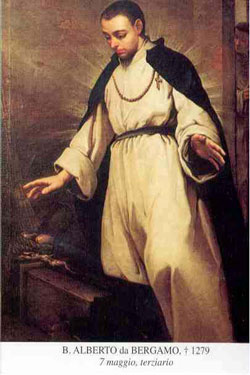 Albert labored as a peasant farmer of Villa d'Ogna, situated in a rustic valley of northern Italy. He was a married Third Order Dominican, known for his deep piety in attending Mass, sermons, the public recitation of the divine office, and other spiritual exercises. He also nourished his devotion with the reading of spiritual books. Albert bore patiently with an ill-tempered wife, and with the complaints of his other relatives who scorned his great charity to the poor. In addition to making eight pilgrimages to the Spanish shrine of Compostela, Albert more than once visited Rome, where he reverently venerated the city's relics and manifested his devotion to the pope. He frequented Rome's hospitals, comforting the ill and encouraging them to confess their sins and amend their lives. Albert spent the end of his life in Cremona. Once, when he had accidentally shattered a wine barrel he was bringing to a needy woman, he prayed, "King of glory, come to my assistance" (an invocation he customarily used), after which he was able to reassemble the barrel and gather up with his hands all the spilt wine.