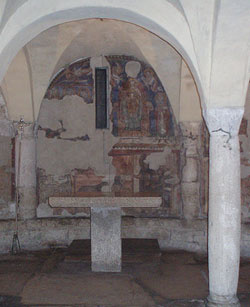 Isaac fled to Italy from his native Syria to escape life under the Monophysite heretics who denied that Christ had two natures (divine and human). Upon arriving in Spoleto, he obtained permission to remain in one of the city's churches after dark in order to pray in the quiet of the night. He continued thus in prayer for three days and nights until a sacristan of the church, jealous of his piety, accused him of hypocrisy, struck him, and drove him away. The ill-tempered sacristan then fell under demonic possession. It was only through Isaac's prayers that the demon was finally expelled. Isaac thereafter withdrew to a cave on Mount Luco to live as a hermit. In his solitude he experienced a vision of the Blessed Virgin Mary, who instructed him to begin accepting followers to be trained in the religious life. Isaac subsequently established at Mount Luco a laura, a community of hermits, each living in his own cell, but regularly assembling for divine worship. He served as the community's abbot. Saint Gregory the Great speaks of Isaac's penchant for humor in sometimes yielding to "extreme joviality."