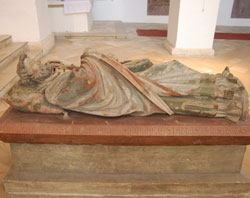 As a child, Erminold, a native of the German region of Swabia, was sent to the monastery of Hirschau to be educated there. He subsequently became a monk, and in 1117 was appointed abbot of the monastery of Prufening. A great friend of the poor, Erminold emptied all the storehouses of his monastery to feed the needy during a famine. When at length nothing was left to feed his monks, Erminold begged God to intervene, and invoked the intercession of the martyr, Saint George. His prayers were answered when the next day a rich noble came to the abbot, promising to relieve their want from his own wealth. Several monks so bitterly resented Erminold's enforcement of monastic discipline that one of them struck him with a heavy wooden beam, leaving him gravely wounded. On the eve of the feast of the Epiphany, Erminold told those standing around his sickbed, "Tomorrow, during the solemnities of the greater Mass, with the choir singing, 'Glory to God in the highest,' I shall depart from this world." His prediction was proved true when the next day he died just as the Gloria was being sung at Mass.
Continue reading about St. Erminold