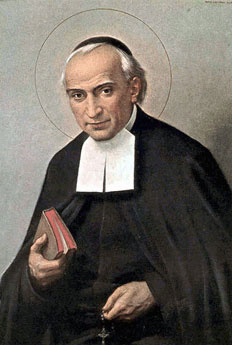 Benilde Romancon was born at Thuret, France on June 13, 1805 and christened Peter. He studied at the Christian Brothers school at Riom and joined them in 1820, taking the name Benilde, after he had been refused two years earlier. He headed the Brothers' school in Billom, and in 1841 he founded a school at Saugues, where he was to spend the rest of his life. Saugues became a model school, and Benilde was known for his dedication, his teaching ability and his sanctity. He died at Saugues on August 13, 1862 and was canonized by Pope Paul VI in 1967. His feast day is August 13th.