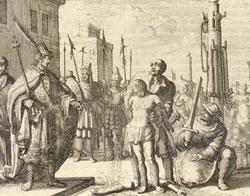 Martyr in Cordoba, Spain. Also called Pelayo, he was a young boy of Asturias who was left by his uncle as a hostage to the Moors of Cordoba. As he remained unransomed for three years, the Cordoban ruler Emir Abd al-Rahman III offered to free him if he would but renounce his Christianity and become a Muslim. He refused, and the emir ordered him tortured. Pelagius died after six hours of agony. Rhoswitha of Gandersheim, a Benedictine poetess, composed a poem in his honor.