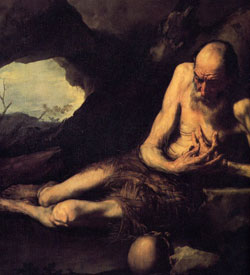 Also known as Paul the First Hermit and Paul of Thebes, an Egyptian hermit and friend of St. Jerome. Born in Lower The baid, Egypt, he was left an orphan at about the age of fifteen and hid during the persecution of the Church under Emperor Traj anus Decius. At the age of twenty two he went to the desert to circumvent a planned effort by his brother in law to report him to authorities as a Christian and thereby gain control of his property. Paul soon found that the eremitical life was much to his personal taste, and so remained in a desert cave for the rest of his reportedly very long life. His contemplative existence was disturbed by St. Anthony, who visited the aged Paul. Anthony also buried Paul, supposedly wrapping him in a cloak that had been given to Anthony by St. Athanasius. According to legend, two lions assisted Anthony in digging the grave. While there is little doubt that Paul lived, the only source for details on his life are found in the Vita Pauli written by St. Jerome and preserved in both Latin and Greek versions.