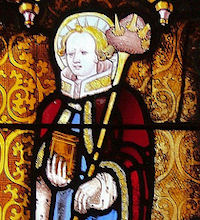 Martyr. A Roman priest who was beaten to death with whips after refusing to sacrifice to the gods, and he was buried in the catacomb on the Via Nomentana. One tradition states that he buried the remains of St. Felicula and was arrested: Since 1969, his cult has been confined to local calendars.