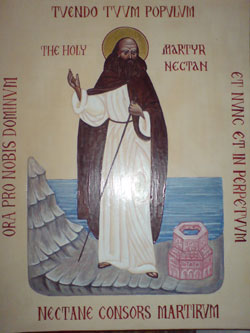 Hermit and martyr, also called Nighton or Nectaran. Possibly a native of Wales or Ireland, he is best known through legends. He lived as a hermit in Devonshire, England, founding churches there and in Cornwall, England. The patron saint of Hartland, Devonshire, he was much venerated during the Middle Ages and his shrine was a popular place for pilgrims until its destruction during the Reformation in the sixteenth century. He was reported beheaded by robbers, and in some traditions was a relative of the chieftain Brychan.