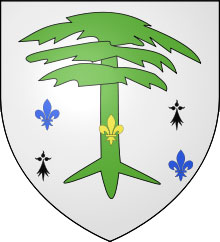 Hermit and founder of Vertou Abbey. He was born in Nantes and was ordained a deacon by St. Felix. Upon becoming a hermit, Martin lived in the Dumen Forest on the Sevre River in Brittany. There he attracted a host of disciples and founded Vertou Abbey, serving as abbot. He also founded Saint Jouin-de-Mames and other monastic institutions before dying at Durieu convent, one of his foundations. Numerous extravagant miracles are attributed to Martin.