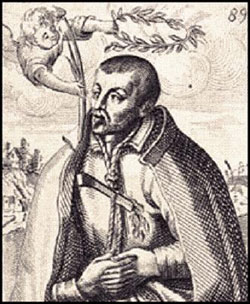 Martyr of England. He was born in Norfolk and entered the Jesuits in Rome. From 1684 until 1592, Robert, an ordained priest, conducted missionary labors in London. Arrested, he remained in jail for three years before being martyred at Tybum. He is one of the Forty Martyrs of England and Wales, canonized in 1970.