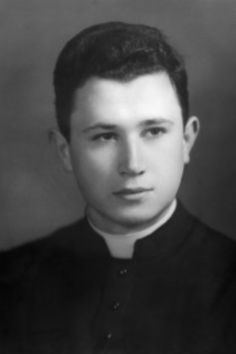 Bl. Fr. Miroslav Bulesic was born in Svetvincenat, Croatia in 1920. Little is recorded of his youth, but he entered the seminary before the start of World War II. After seminary, he studied in Rome, but his bishop recalled him to Croatia at the outbreak of hostilities.

During the war, he served in Baderna a place that saw intense fighting between communists and fascists. At the end of the war in 1945, Fr. Bulsec was transferred to Kanfanar where he witnessed communist abuses of clergy.

Those abuses prompted Fr. Bulsec to speak out against the communists. This was dangerous, as a communist government was transitioning into power in 1945.

During the communist takeover of the country which would become Yugoslavia, a total of 450 priests, 73 seminarians, 30 nuns and 22 monks were killed by either murder or abuse following imprisonment. Fr. Bulsec became one of these number.

On Aug. 24, 1947, Fr. Bulsec was in a neighboring community for a conformation service. While he was in the rectory, communists entered with the intent of killing him for speaking out against the systematic abuses of the clergy.

The incident in which he was killed has been described as a "hate crime" by Cardinal Angelo Amato, prefect of the Vatican's Congregation for Saint's Causes.

Pope Francis beatified Bl. Fr. Bulsec on Sept. 29, where he gave thanks for his life and his work. An effort to have Fr. Bulsec recognized as a saint was started in 1998.