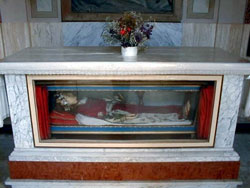 Sidney Hodgson, layman, was one of the London Martyrs of 1591. There is very little known about him, except that he was arrested with some priests and sentenced to death. On October 18, 1591 a royal proclamation led to the stricter enforcement of the laws against Catholics in England. Consequently, he and six others were martyred on December 10, 1591. They were hanged, drawn and quartered. Sidney was beatified in 1929.