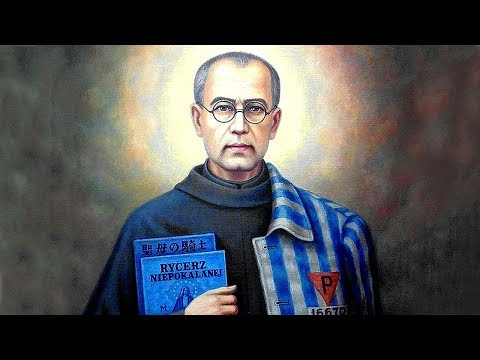 St. Maximilian Kolbe was born as Raymund Kolbe on January 8, 1894, in the Kingdom of Poland, part of the Russian Empire. He was a Polish Conventual Franciscan friar and a martyr in the German death Camp of Auschwitz during World War II.

St. Maximilian Kolbe was very active in promoting the Immaculate Virgin Mary and is known as the Apostle of Consecration to Mary. Much of his life was strongly influenced by a vision he had of the Virgin Mary when he was 12.

"That night I asked the Mother of God what was to become of me. Then she came to me holding two crowns, one white, the other red. She asked me if I was willing to accept either of these crowns. The white one meant that I should persevere in purity, and the red that I should become a martyr. I said that I would accept them both."

One year after his vision, Kolbe and his elder brother, Francis joined the Conventual Franciscans. In 1910, Kolbe was given the religious name Maximilian, after being allowed to enter the novitiate, and in 1911, he professed his first vows.

At the age of 21, Kolbe earned a doctorate in philosophy from the Pontifical Gregorian University. He would also earn a doctorate in theology by the time he was 28.

St. Maximilian Kolbe organized the Militia Immaculata (Army of the Immaculate One) after witnessing demonstrations against Pope St. Pius X and Benedict XV. His goal was to work for the conversion of sinners and enemies of the Church, specifically, the Freemasons and he would so with the intercession of Mary.

In 1918, he was ordained a priest and continued his work of promoting Mary throughout Poland. Over the next several years, Kolbe took on publishing. He founded a monthly periodical titled, "Rycerz Niepokalanej" (Knight of the Immaculate). He also operated a religious publishing press and founded a new Conventual Franciscan monastery at Niepokalanow, which became a major religious publishing center.

Kolbe also founded monasteries in both Japan and India. To this day, the monastery in Japan remains prominent in the Roman Catholic Church in Japan.

In 1936, Kolbe's poor health forced him to return home to Poland, and once the WWII invasion by Germany began, he became one of the only brothers to remain in the monastery. He opened up a temporary hospital to aid those in need. When his town was captured, Kolbe was sent to prison but released three months later.

Kolbe refused to sign a document that would recognize him as a German citizen with his German ancestry and continued to work in his monastery, providing shelter for refugees - including hiding 2,000 Jews from German persecution. After receiving permission to continue his religious publishing, Kolbe's monastery acted as a publishing house again and issued many anti-Nazi German publications.

On February 17, 1941, the monastery was shut down; Kolbe was arrested by the German Gestapo and taken to the Pawiak prison. Three months later, he was transferred to Auschwitz.

Never abandoning his priesthood, Kolbe was the victim to severe violence and harassment. Toward the end of his second month in Auschwitz, men were chosen to face death by starvation to warn against escapes. Kolbe was not chosen but volunteered to take the place of a man with a family.

It is said during the last days of his life Kolbe led prayers to Our Lady with the prisoners and remained calm. He was the last of the group to remain alive, after two weeks of dehydration and starvation. The guards gave him a lethal injection of carbolic acid. The stories tell that he raised his left arm and calmly awaited death.

St. Maximilian Kolbe died on August 14 and his remains were cremated on August 15, the same day as the Assumption of Mary feast day.

Kolbe's is often depicted in a prison uniform and with a needle being injected into an arm. He is the patron saint of drug addicts, prisoners, families, and the pro-life movement and his feast day is celebrated on August 14.