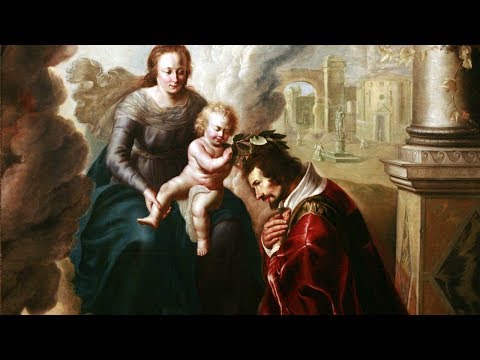 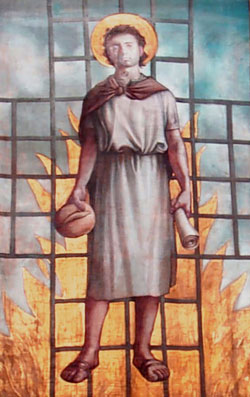 The year was 258 A.D. It was a difficult beginning for what would become the First Christian Millennium. Hostility against the early followers of Jesus Christ was growing. The barbarism and severity of pagan Rome had begun to reach a fever pitch. It would soon lead to a blood lust. The newborn Christian Church, faithful to the One who had given Himself for the life of the world, continued the work of His redemption.

Roman authorities charged Christians of that era with "odium humani generis" [hatred of the human race]. The Romans claimed to be citizens of a great empire, yet they practiced primitive forms of abortion as well as "exposure", the killing of unwanted newborns.

First and Second century Rome was a challenging mission field for these early Christians. Rome proclaimed itself the shining example to the world of its age while it violated the Natural Moral Law and embraced debauchery. Sound familiar?

The day that Deacon Lawrence experienced his birth from death to life was an ominous and frightful day in ancient Rome. Four days earlier, the great Bishop of Rome, Sixtus, was arrested by soldiers of the emperor Valerian, along with his beloved deacons, and beheaded.

Valerian had issued an edict to the Roman Senate that all the Christian clergy-bishops, priests and deacons-were to be arrested and executed. There were so many holy people among the martyrs of early Rome. That makes it even more remarkable that the life and death of this one humble Deacon-Lawrence-is attributed with all of Rome becoming Christian.

Sentenced to death in the Emperor Valerian's sweeping condemnation of all Christian clergy, Lawrence offended the Emperor  - and endeared himself to all Christians since then - by assembling before Valerian the real gold and silver of the Church, the poor.

According to the Christian tradition, Deacon Lawrence, knowing that the fervor of Valerians' hatred was extending to all Christians who owned property, began to give it all away. He distributed the money and treasures of the Church to the city's poor-believing the clear admonition of the Savior that they were blessed and especially loved by Him.

Valerian heard the news and wanted the treasure to satisfy his unbridled lust for worldly power. So, he offered Deacon Lawrence a way out of sure death. If he would show him where the Church's great gold and silver were located, he would issue an order of clemency, sparing his life so that he could continue his work.

Valerian was delighted when the deacon asked for three days to gather all the gold and silver of the Church together in one central place! His pride and greed filled blinded him from seeing the truth.

For three days, Deacon Lawrence went throughout the city and invited all the beloved poor, handicapped, and misfortunate to come together. They were being supported by a thriving early Christian community who understood the Gospel imperative to recognize Jesus in the poor.

When Valerian arrived, Deacon Lawrence presented him with the true gold and silver of the Church, the poor! The emperor was filled with rage! Beheading was not enough for this Christian Deacon. He ordered Deacon Lawrence to be burned alive, in public, on a griddle. Witnesses recorded the public martyrdom. The deacon cheerfully offered himself to the Lord Jesus and even joked with his executioners!

The tradition records massive conversions to the Christian faith as a result of the holy life and death of one Deacon who understood the true heart of his vocation. He was poured out, like his Master, Jesus Christ the Servant, in redemptive love, on behalf of others. It is still said to this day that all of Rome became Christian as a result of the faithful life, and the death, of this one humble deacon. He was buried in a cemetery on the Via Tiburtina. On that spot, Constantine would later build a Basilica.

A special devotion to Lawrence, deacon and martyr, spread throughout the entire Christian community. Early Christians had no doubt that those who had gone to be with the Lord continued to pray for those who still struggled in this earthly life. They saw in Lawrence a great example of how to live, and how to die, faithful to the Gospel.

Years later, St Augustine reflected on the heroism of this great deacon in a sermon preached on his feast day, emphasizing that his life and death were an example for all Christians to emulate: "I tell you again and again my brethren, that in the Lord's garden are to be found not only the roses of His martyrs. In it there are also the lilies of the virgins, the ivy of wedded couples, and the violets of widows. On no account may any class of people despair, thinking that God has not called them."

The life and death of Deacon Lawrence speaks the timeless message of the Gospel to all who will listen.  Whether we are ever called to shed our blood in what has traditionally been called red martyrdom or simply called to offer our sacrifices daily in a continuous life of poured-out love, traditionally called white martyrdom, we continue the redemptive work of the Lord through our daily Christian lives and participation in the life of the Church.

The Deacon and martyr Lawrence offered himself fully to Jesus Christ - and shows us the way to do the same.

Saint Lawrence, Deacon and Martyr, Pray for us