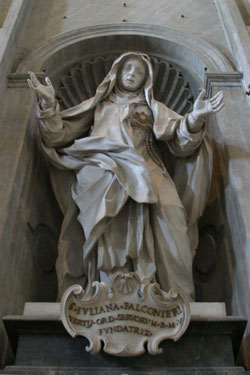 Juliana Falconieri was born of wealthy Florentine family in 1270. When she was very young her father died, and thus she was raised by mother and an uncle named Alexis who was one of the founders of the Servites. At the age of fifteen Juliana refused her family's plan for marriage. She became a Servite Tertiary a year later, although she continued to live at home until 1304 when her mother died. Immediately thereafter Juliana gathered together a group of women dedicated to prayer and good works. Later she drew up a rule of life and was appointed superioress of the group. Since her rule was approved by Pope Martin V one hundred and twenty years later, she is considered to be the foundress of the Servite nuns. She died in 1341 at the age of seventy-one and was canonized by Pope Clement XII in 1737.