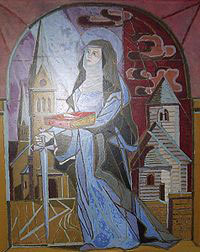 St. Helen of Skovde, Widow Helen of Skovde was born in Vastergotland, Sweden, in the twelfth century. She belonged to a noble family. However, after the death of her husband, she gave all her possessions to the poor. Following this, Helen made a pilgrimage to Rome. When she returned home, she found herself accused of involvement in the death of her son-in-law. It was later proved that the deed had been perpetrated by mistreated servants, but by that time, Helen had been executed. Following Helen's death, many miracles were reported at her tomb, and public devotion to her was approved in 1164, just four years after her death. Like Jesus, the innocent Lamb, St. Helen was put to death. Her goodness was preserved through the manifestation of God's power at her tomb. Although we may be suspect but innocent here in this life, God will provide sure justice hereafter.