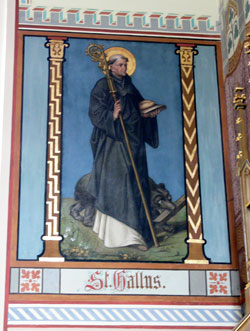 Famous Irish missionary and companion of St. Columban. Born in Ireland, he was trained by Sts. Columban and Comgall, and he was one of the twelve companions who accompanied Columban to France. He was a noted scriptural scholar and helped in the founding of Luxeuil Monastery. When St. Columban was exiled in 610, Gall followed him to Switzerland and then to Italy. Gall remained in Switzerland and became a hermit on the Steinach River. The monastery of St. Gall was erected on this site. Gall refused two bishoprics and abbacy of Luxeuil. He is venerated as an apostle to the land. He died in Arbon.

St. Theresa - Pick Me A Rose